A Wolf Sable Pomeranian is a rare gene mutated breed with prized choices among the Pomeranian variants. The spotlight of this Wolf Sable Pom is their coat and color. They have a combination of a light-colored undercoat with a black-tipped outer coat with colors varying from black to cream.

A Wolf Sable Pom will have one of three genetic mixtures.

All three of the AW genetic mixtures for the Wolf Sable Pom are also dependent on the canine having the K, B, E, and N genes. The Wolf Sable shade will only occur if the pup has an additional mix of the E and K genes.

Canines with a dominant Agouti locus for the (aw) allele will define a Wolf Sable phenotype. ‘Agouti’ is a colloquial term for a precise breeding line. It refers to a group of genes that govern the suppression or production of certain hues in the dog’s skin and coat. Agouti genes impact cells that produce eumelanin, the dark pigment seen in animals. It still exists in wolves, rodents, coyotes, rabbits, and a few dog breeds.

Usually, Pomeranians are mislabelled due to the variety of wolf sable given just by visual confirmation. However, you can only identify whether your puppy is a true Wolf Sable through color gene testing. Although these canines look different from other Poms, they carry the same traits and characteristics as other varieties of the Pomeranian breed and are known to be very loyal.

You can see Wolf Sable genetics in other dog breeds, including:

A Wolf Sable Pomeranian is a pattern and color variation of the purebred Pomeranian. The wolf factor of their name indicates their gray coats, similar to those found in Gray Wolves. On the other hand, the sable part of their name refers to the distinct sable markings.

Wolf Sable Pomeranians are like any other Pomeranian variants and are known for their smartness and dedicated disposition. However, there are a few subtle changes, mainly regarding their grooming requirements and health issues.

You can identify a Wolf Sable Pom with the help of its two distinct features.

Wolf Sable Pom’s coat is double-layered with a short and dense inner layer and a long, straight outer layer. They will have a compact, proportionally built classic spitz aesthetic, round eyes, perky ears, a triangular silhouette skull and face, and tapering snouts. In a nutshell, if you are looking for a very lovely, loyal, and adaptable dog, Wolf Sable Pomeranian is an excellent option for you.

Wolf Sable Pomeranians are extremely sweet, caring, affectionate, loving, and playful, making them perfect companions for children and people of all ages. However, they are sensitive breeds who need the companionship of the family. Therefore, the most crucial issue you will be tackling in training will be separation anxiety. They hate being away from their family exhibiting destructive behaviors if left alone. In addition, they are perfect apartment dwellers with low prey drives.

They may look like tiny, pocket-sized wolves, but Wolf Sable Poms are nowhere near as scary or aggressive as the wild creatures they are named after. However, there are a few personality features you need to know about in addition to the good ones.

Wolf Sable Pomeranians are people-pleasing, so you can efficiently and easily train them. Sometimes, you may find it a challenging process because of their stubbornness. Also, Wolf Sable Poms are vocal and bark for any reason. However, early socialization and proper training can keep your dog’s good conduct.

So, you must be consistent and patient enough during the session. They react well to positive reinforcement, but punishment or criticism can affect them emotionally. They are not as aggressive and territorial as other lap dogs, and they don’t have a destructive streak.

Here are some recommendations for training your Wolf Sable Pomeranian:

Here are some training activities for your Wolf Sable Pomeranian:

Wolf Sable Pomeranian requires a medium activity level and exercise to sustain their energy. These toy breeds get most of the practice during wandering and roaming around the house. However, take them on short walks or run daily for about 30 minutes to cheer them up. Here are some exercises to keep your Wolf Sable Pom engaged:

The Wolf Sable Pomeranian lives quite long, with a life expectancy of 12 to 15 years compared to toy breeds. However, they are prone to develop specific life-threatening health diseases. Some of the conditions rampant in Wolf Sable Pom include:

Obesity: A significant health disorder in the Wolf Sable Pomeranian due to excess weight and can cause back pain, digestive disorders, joint problems, and heart diseases. The most suitable way to control this disorder is by following a nutritious diet and regular exercise.

Cherry Eye: A condition in which the protruding of a gland under the third eyelid seems like a cherry at the eye corner. It involves a vet removing the gland that’s protruding.

Intervertebral Disk Disease (IVD): A vertebral column shields the dog’s spinal cord. In between the vertebral column’s bones, IVD permits the vertebral’s movements, which usually act like shock absorbers. They are assembled with two layers, the inner soft jelly-like layer, and the outer fibrous layer. This disorder happens when the inner jelly-like layer pushes the spinal cord, resulting in spinal cord compression—signs like paralysis, neck and backache, loss of bladder, sensation, and bowel control are expressed by your dog.

Patellar Luxation: A situation where the kneecap is dislocated. Symptoms of patellar luxation include lifting the affected leg when hopping, running, or skipping a few steps. Dogs may also kick their leg out in an attempt to pop the kneecap back into position.

Hip Dysplasia: A structural defect in the hip socket prevents the joint fitting correctly. It can lead to arthritis and can become very painful. Typical signs include lameness in the affected leg and difficulty getting up from a lying-down position.

Glaucoma: A prevalent condition in both dogs and humans. This eye disease can even result in blindness. In affected dogs, symptoms such as watery eyes, pain, squinting, and redness can be noticeable.

Gastric Bloat: Pomeranians are prone to bloat due to their deep chest. It happens when the tummy grossly expands with air and then twists to cut off any exit route for food or atmosphere. This is a severe and life-threatening illness. Symptoms include the inability to vomit, restlessness or reluctance to lie down, pacing, foaming at the mouth, and a distended stomach.

Diabetes: Another genetic disease to the Pom breed. Many of the symptoms are equivalent to those exhibited by humans, including increased hunger, excessive thirst, and frequent urination. Canines may also show weight loss despite their increased appetite. Sustaining a healthy weight is essential for preventing and managing this disease in canines.

Epilepsy: Often, no one can recognize the exact cause for their seizures with canines. And their situation is referred to as idiopathic epilepsy. However, symptoms can range from foaming at the mouth, drooling, and a drunken gait to collapse, shaking, and loss of consciousness.

Progressive Retinal Atrophy (PRA): An eye disease causing blindness from the failure of photoreceptors at the back of the eyes. Dogs with this disease can persist for several years since they have other senses to equalize.

Providing your Wolf Sable Pomeranian with high-quality, well-balanced, nutritious food will help establish a good foundation for their overall wellness and health. However, you should be conscious of the food quantity you are serving to your toy breed, as they are predisposed to obesity. You can feed an adult Wolf Sable Pom 1/2 to 1 cup of kibble split into 2 to 3 meals a day. Excess weight can instantly lead to health problems for a small breed like the Pom. Therefore, it’s necessary to check your dog’s food quantity with your veterinarian.

Wolf Sable Pomeranians are apartment dwellers and a perfect choice for people living in cities, towns, and countries. They are very active indoors and can be great without a yard. But mainly, they need their family’s warmth and companion to maintain an excellent behavioral condition.

Adding a Wolf Sable Pomeranian to Your Family

Things to remember before adding a Wolf Sable Pomeranian

It is advisable to get a Wolf Sable Pomeranian puppy from a reputable and reliable breeder who can provide you with health, vaccination, and gene testing records.

On average, a Wolf Sable Pomeranian puppy may cost around $1500 to $2000, not including miscellaneous costs. 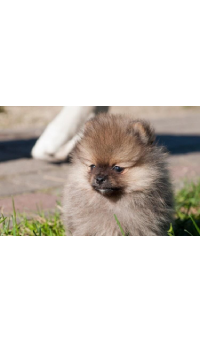