It should be noted that Welsh Springers and English Springers are two different purebred dogs. The two Welsh Springer Spaniels are rare; only 300 puppies are registered with AKC annually. Though rare, they are highly affectionate and a lovely family dog to live with.

Once hunting dogs, Welsh Springer Spaniels have become the perfect family dog. They are one of the most adaptable and loyal companion dogs in the US. They have eye-catchy red and white patterns that make them stunning. They are affectionate around children and fit into any family, big or small. They are highly energetic and active and love hiking. Welsh Springer puppies are good-natured and intelligent, making training a breeze.

Welsh Springer Spaniels are rectangular, medium-sized dogs with bold red and white patterns. The male Welshies are 18-19 inches tall and weigh around 40-45 pounds, while the female Welshie is 17-18 inches tall and weighs about 35-45 pounds. They are smaller than English Springers. The coat is silky, straight, and flat. They have a body longer than the English Springer Spaniel with floppy ears. The medium-sized eyes are brown in color, the ears and tail are lightly feathered, while the legs, chest, and underside are heavily feathered. They have black or brown noses.

Head: The head is equal to the body, with an oval-shaped skull

Topline: Their topline is rectangular

Body: Their body strong and compact

Hindquarters: They bear strong, muscular hindquarters that aid in keeping them agile

Coat: The Welshies bear a flat and soft coat.

Welsh Springer Spaniel is a cheerful dog that fits your home perfectly. They are very affectionate and always eager to please the owners. They crave the attention of their owners. These canines are highly energetic and need lots of activities to be happy and healthy. They are loyal, affectionate, and friendly with strangers. They are the most comfortable when they are at home with their humans. They are people-friendly and always eager to please. They are kid-friendly and a perfect family dog. These canines tend to bark to alert their owners.

Welsh Springer Spaniels are easily trainable and always eager to please. They are high in energy and active. They love water and hiking. They require positive reinforcement in training and don’t respond to harsh methods. Despite being soft and easy to train, house training might be difficult. They can be recommended crate training. With proper training the Welsh Springer Spaniel can excel in field training, hunting, agility, fetch, and brisk walks, tracking, retrieving. Early socialization is mandatory for Welshies as they are reserved with people and situations.

English Springer Spaniels are active and high-energy dogs bred for hunting. They need proper exercise to keep their mental stimulation busy. They have high stamina and enjoy outdoor activities like hiking, swimming, and jogging and require two hours of physical activity daily. Giving your Welshie plenty of exercise keeps him happy and prevents behavioral and anxiety problems. Welsh Springer Spaniel should be monitored while they are left off leash, as they are great wanderers.

Welsies have a flat and smooth coat. They are not hypoallergenic and shed averagely. They can be bathed when needed to keep the folds clean from dirt and debris. It is essential to keep the skin dry thoroughly after a bath to prevent infections from moisture. The eye should be checked regularly for irritation, redness, or discharge. The nails need to be trimmed periodically. Brush the teeth without fail daily to prevent dental problems. Ears accumulate dirt and must be washed and cleaned to avoid bacteria and other ear-related issues.

Welsh Springer Spaniel is a healthy and active dog. Yet, it’s always wise to be aware of the health conditions they are prone to.

Although the symptoms begin to show as early as four months, some dogs will not show these signs until later in life. Further, it involves both elbows, of which one may be heavily affected.

Hypothyroidism: Hypothyroidism is a condition in which a dog’s metabolism is slowed due to the lack of thyroid hormone production. Among the signs and symptoms are:

Glaucoma: Glaucoma is an eye condition that affects both dogs and humans and needs medical attention. Signs such as squinting, pain, watery eyes, and redness can indicate glaucoma, leading to blindness. Regular health tests can aid in recognizing and curing glaucoma at an early stage.

Epilepsy: This is also called idiopathic epilepsy, causes seizures for no reason, and is less dangerous.

Entropion: The lower lid folds inward towards the eye resulting in chronic eye irritation. This can be treated with surgery.

Welsh Springer Spaniel requires a daily amount of 1.5 to 2.5 cups of high-quality dog food divided into two meals. They are active dogs and need the right amount of nourishment. However, every dog’s diet depends on size, age, metabolism, and activity level. They love to eat and are prone to obesity. They can be kept healthy and in shape with the nourishing and right amount of meals.

The English Springer Spaniel loves to be around people and is an outdoor dog. They are eager to please people, fun-loving, and have massive stamina for outdoor activities. They can adapt to any family and love to be near their owners. They require large spaces and a yard and don’t fit in apartments. They are sensitive and suffer separation anxiety when left alone. They tolerate both cold and hot temperatures moderately.

Adding a Welsh Springer Spaniel to Your Family

Getting a Welsh Springer Spaniel from a reputable breeder is best to prevent unavoidable circumstances like health and vaccination. It is best to check with the puppy’s parents to cross-check its health and happiness. 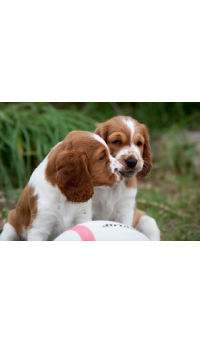 Differences between an English and a Welsh Springer Spaniel

Heidi Spinnvill – The Life of a Welsh Springer Spaniel