Tornjak has a calm demeanor and is friendly, brave, obedient, intelligent, and full of dignity and self-assurance. He is a fierce protector of the things entrusted to him, incapable of being tricked and distrustful of outsiders. He is faithful to his owner, calm, and loving towards those who live in his proximity.

Tornjak is popularly known as the Bosnian and Herzegovinan Croatian Shepherd Dog. He is a large, strong dog with good proportions and agility. Tornjaks have a squarely-built physique, a powerful, harmonic, well-balanced movement, and dense, long fur. According to research, Tornjak descends from the Tibetan Mastiff or hails from Iran. That ecosystem has produced a healthy and powerful watchdog with minimal food and shelter requirements. Tornjaks are gentle with humans but violent with other animals and canines who may threaten their master and house. However, they like working and quickly obey their owners’ directions.

The foundation stock for the Tornjak breed’s revival has been the almost extinct descendants of genetically homogenous, native, archaic forms of shepherd dogs. The dogs from the original strain were scattered throughout Bosnia, Herzegovina and Croatia mountainous regions and their adjacent valleys. The years 1067 and 1374 are significant historical dates.  For the first time, the Bosnianherzegovinian-Croatian breed is mentioned in written texts from these eras. Around 1972, besides studying their historical and current existence, an organized rescue from extinction began in Croatia, Bosnia and Herzegovina; Continuous pureblood breeding began in 1978. The breed’s lineage now consists of countless purebred dogs spread throughout Bosnia and Herzegovina and Croatia, chosen over several generations.

Tornjak is a robust, well-muscled giant breed dog. His physique is square-built, and he is adequately proportioned. He has a strong bone structure but is not bulky or coarse. The Tornjak has a woolly, lengthy coat that is exceptionally thick or dense. He has a double coat, with a straight and hard topcoat and a woolly undercoat that is gentler to the touch. Although he has a long tail, it does not curve over his back. His eyes are wide and almond-shaped, and they are dark brown. His nose is likewise large and black in hue, with wide nostrils. Tornjak is often white with colorful markings, giving him parti-color or piebald in some situations. Although uncommon, for the first time. He may wear a black mantle with white patterns across his body. Tornjak comes in three colors: black, blue, and green.

Tornjak is a farmyard guard dog employed for herding and protecting animals. He has a steady demeanor. He is pleasant, calm, brave, obedient, bright, and full of dignity and self-assurance. When he’s at work, he’s tenacious in protecting the goods given to him, refuses to be bribed, and is wary of outsiders. He will risk his life to save his owners, herd, and property. With those he knows, Tornjak is friendly.

Tornjak is pretty loving towards individuals who live in his proximity. He is devoted to his master and very composed in his presence. He is fast to learn and does not forget things quickly, and willingly completes chores allotted to him. Robust, these dogs lay on the ground and are frequently coated in snow during the snowy winter evenings. He’s a delight to coach. The goal of this dog’s training is to make him the pack leader.

It shouldn’t be that tough to train a Tornjak. Since these dogs are intelligent and enthusiastic, they’ll quickly pick up the concept you’re attempting to accomplish. They’re also not as prone to boredom as other intelligent breeds, and they’re prepared to perform the same thing over and over if it makes you happy.

However, if Tornjaks disobey, be cautious not to punish them. Positive reinforcement works best for them. Losing trust once will disallow you to restore it. They have extensive memory, which may be beneficial during training and detrimental if you get on their bad books.

Socialization is crucial to training and should begin at the same time. You only have a short window to introduce them to new stimuli in a good way. So, ensure they have various experiences before they are nine months old.

Tornjaks are large animals, yet they require modest activity and exercise. Tornjaks love to spend time outside exploring, guarding, and keeping an eye on your house, family, and other pets. Tornjaks like strolling, hiking, and swimming as well. The breed is brilliant and trainable, capable of learning and performing a wide range of tasks. Tornjaks are naturally apprehensive of strangers. So, start socializing your puppy as soon as possible; they grow up to be cautious, yet welcoming of pleasant guests. They need 45 minutes of walk covering 10 miles per day.

However, as a puppy, Tornjaks are better at the lounge resting and strolling a little as their joints develop in the first year of their birth. Too many activities and exercises can disrupt their joints and lead to joint disorders.

Tornjak’s long double coat is quite simple to maintain. They shed twice a year. You’ll need to brush him once a week and bathe him occasionally. If your Tornjak spends a lot of time indoors, you will need to brush him regularly because his coat sheds a lot. Every two weeks, trim his nails, brush his teeth, and clean his ears. Examine his ears for signs of infection, such as redness or a foul odor. Additionally, check his eyes for infections and regularly clean them.

Usually, large-breed dogs are prone to various health concerns, but this does not appear to be the case with Tornjaks. If properly fed and cared for, these dogs are usually healthy.

However, you must avoid putting too much stress on their joints by not overfeeding them and not forcing them to perform a lot of leaping. If their meals are also hefty in protein, they may suffer.

Hip Dysplasia: Hip dysplasia is a disorder in which the socket section of the hip joint does not entirely fit the ball portion, putting the joint at danger of dislocation. Hip dysplasia can manifest itself at birth or develop later in life. Arthritis can develop as a dog gets older. On one or both rear legs, some dogs display indications of discomfort and lameness. X-ray screening for hip dysplasia in animals is available through the Orthopedic Foundation or the University of Pennsylvania Hip Improvement Program.

Elbow Dysplasia: Large-breed dogs are affected by this inherited disease. Joint laxity is produced by the three bones that make up a dog’s elbow developing at different rates. Severe lameness can arise as a result of this. To treat the problem, your veterinarian may recommend pain medication or surgery.

Obesity: Large-breed dogs are prone to obesity if proper diet and exercise are not provided. They may also get diabetes, which may be another cause of obesity.

Skin and Coat Issues: Proper hygiene and diet are mandatory for dogs with long fur and double coats. Lack of nutrition and hygiene leads to skin and coat disorders.

Recommended tests for the Breed

High-protein meals are usually recommended for dogs since they give widely accessible energy without causing weight gain. Tornjaks, on the other hand, are one of the few breeds that will thrive on a low-protein diet.

Tornjaks need 3 cups of food daily. However, it is best to consult with the veterinarian before feeding him anything. Provide him with clean, fresh water at all times.

Tornjack cannot live in apartments, as they are meant to roam around and guard the property and the family. However, they do have good spacious areas, especially the backyard, if you plan to take a Tornjak puppy.

Adding a Tornjak to Your Family

To Buy a Tornjak Now 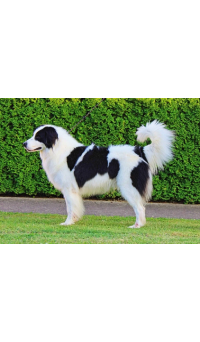 Tornjak and a small aggressive dog!