Teacup Chow Chow pups resemble their bigger, standard-sized counterparts. Their crimson coats are fluffy and thick, and their tongues are black. The Teacup Chow Chow is often described as resembling a miniature lion. They are the small version of blue-tongue-Chow Chow from ancient China. They are commonly known as Mini Chow Chow and Miniature Chow Chow.

Teacup Chow Chows range in height from 17 to 20 inches and weigh between 45 and 70 pounds. They have the same characteristics as ordinary Chow Chows, but they are noticeably lighter and smaller.

Teacup Chow Chows are often square-built and heavy-boned, giving them a robust appearance despite their small size. It has dark brown eyes and trapezoidal ears with slightly rounded ends, which are oriental. Their nose is large and black in hue, and their snout seems square and short. They have dense, fluffy red coats and black tongues. Their bodies are small and compact, with a deep, muscular chest and a tail positioned high and near their back. Their tails are bushy and often curl towards their heads, forming a circle.

A Teacup Chow Chow’s disposition is similar to a cat. They are reticent, self-sufficient, distant, and obstinate. These are the same behaviors that their standard-sized counterparts display. They like to interact with their owner, so outsiders are ignored unless they’re creeping on your property. Then, they will try to challenge them in that situation.

You’ll need to engage and socialize your Teacup Chow Chow with other dogs and pets early on as they have a natural desire to be dominant. This is because  Teacup Chow Chows are raised to be guard dogs in the first place.

It is necessary to train a teacup chow chow from the beginning as they are stubborn and tend to be aloof—they need proper socialization and obedience training. You must be consistent while training them. Positive reinforcement will work the best, along with lots of treats and generosity.

Strolling  Teacup Chow Chows for 15 minutes per day would be enough to exercise. However, because they don’t like the heat, it’s wise to keep them indoors while the weather is hot.

Teacup Chow Chows don’t require a lot of room and so you can keep them physically active within your house with toys and other activities and then take them out for a run or a neighborhood stroll when the weather permits.

Teacup Chow Chows are double-coated and require constant grooming. Professional groomers recommend brushing them three times a week to keep their coats shiny and remove superfluous fur. Cleaning their teeth and cutting their nails are also essential. Brush their teeth twice or three times a week to minimize tartar accumulation, and trim their nails once or twice a month.

The concern with miniaturization is that it exposes canines to health issues that aren’t as frequent in larger dogs.

This condition affects a few Teacup Chow Chow puppies within the first two weeks of their lives. Lethargy, vomiting, diarrhea, and high-pitched crying are the first indicators.

Hookworms and roundworms frequently target Teacup Chows because they cannot handle a parasite load. When larvae enter a teacup Chow Chow’s skin, the former occurs, whereas the latter occurs when they swallow polluted soil, plants, etc.

Teacup Chows are frequently created from the litter’s runt. This indicates they didn’t obtain enough nutrition from their mother’s womb, resulting in cardiac problems after they were born. Patent ductus arteriosus, pulmonic stenosis, and aortic stenosis are Teacup Chows’ most frequent cardiac problems.

This congenital condition makes swallowing, eating, and even breathing difficult. In addition, a prominent “cleft” at the roof of the mouth is apparent in Teacup Chows with this issue, which is caused by improper embryological development.

IVDD affects Teacup Chow Chows by causing a damaged and bulging disc in their back or neck. This may make it difficult for them to walk correctly and cause excruciating discomfort that renders them motionless.

Since Mini Chow Chows have a high metabolic rate, they will burn calories quickly. Depending on their activity level, you can feed them up to four times a day while they are very young. Most veterinarians, however, recommend feeding them three times a day until they reach the age of six months.

When selecting dog food for your Teacup Chow Chow, look for one with a high caloric value, B vitamins, and complex carbs, all of which are essential for their growth. Similarly, they have fragile digestive systems and must pick an easily digested brand because of their small stature.

Teacup Chow Chow requires a cozy environment for himself, as they are not highly active. They will need an extremely patient human family due to their stubbornness. They do well with apartment living and are very jolly—15 minutes of regular stroll all they want. A healthy environment is essential for a Teacup Chow Chow to develop appropriately.

Adding a Teacup Chow Chow to Your Family 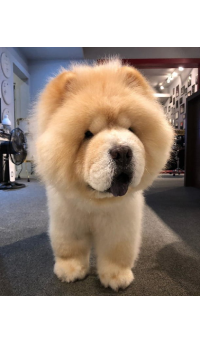