Shiba Husky mix is a cross between two gorgeous dog breeds, a Shiba Inu and a Siberian Husky. The breeds are among two of the most popular worldwide. Both breeds have a unique appearance that forms a dog with a striking physique and eye-catching colors when bred collectively. Shiba Husky mix can also be called Shusky, Siberian Shiba, Shiba Inu Husky mix, and Inu Husky mix. While both parent breeds appear the same, they have different personalities when keenly observed. Although Shiba Husky mixes are adorable and affectionate, they aren’t suggested for everyone because of their extreme intensity and stubborn behavior. 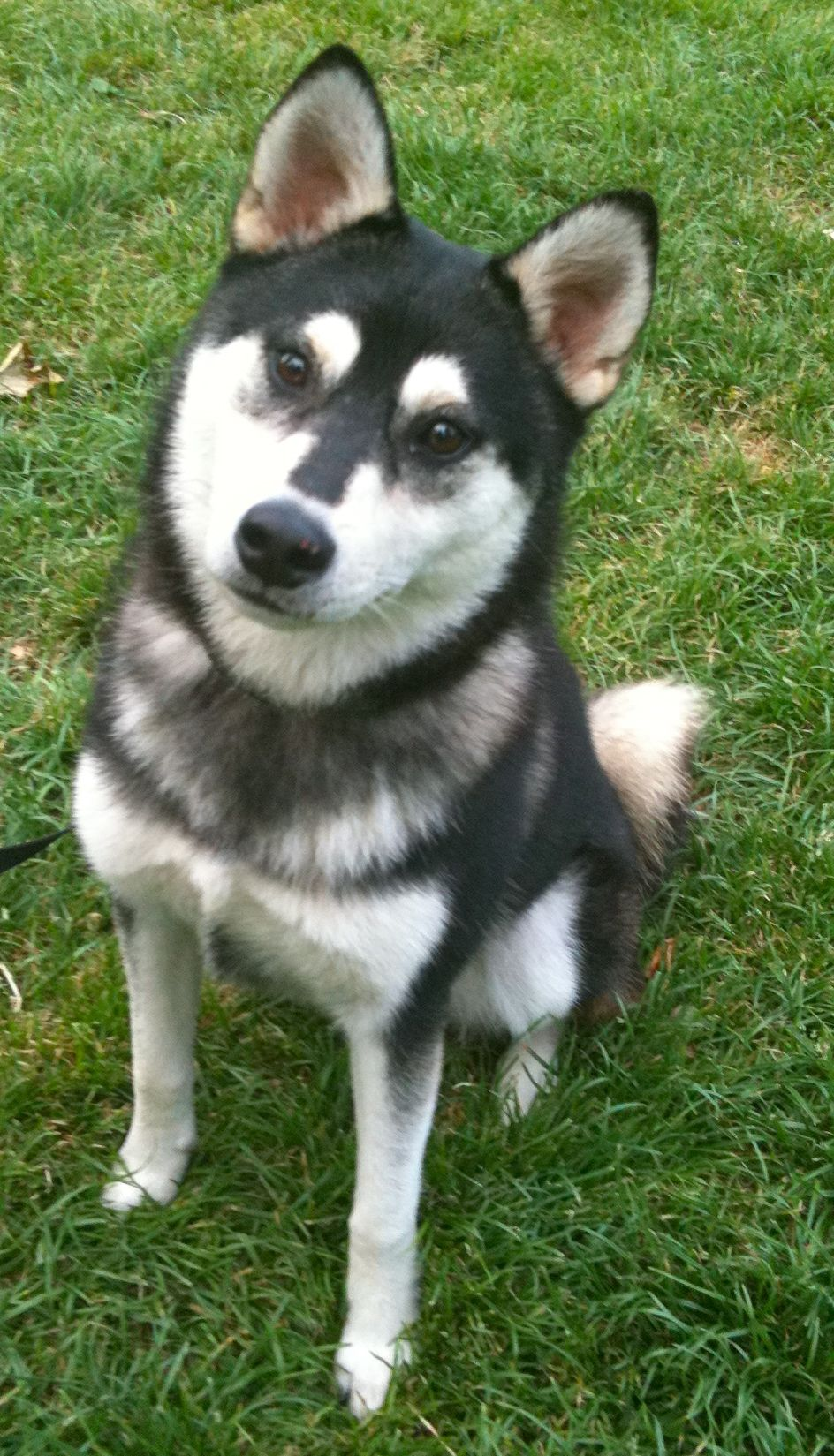 These dogs have a fox/wolf-like appearance with erect ears and intense, intelligent eyes that vary in color. Shiba Inu Husky Mixes have a brush, sickle-shaped tail. They are double-coated and come in a variety of coat colors. However, the most common Shiba Inu Husky Mix coat color is black and white.

The mix of a Shiba Inu and a Husky can be a challenging one. Both breeds are exclusively prideful and solid dogs. Shiba Inu Husky Mixes take after their parents considering they are active dogs and enjoy running around a lot. In addition, they can also be reserved and may want to spend several moments for themselves.

Shiba Inu Husky Mixes are an assertive and sometimes aggressive mix breed of dogs. They are suggested for a person willing to move around and be bold with these strong-willed dogs. Mostly, these dogs aren’t recommended for novice pet owners. However, with proper training and loving care, Shiba Inu Husky Mix can be a cheerful and assertive dog breed. Do not hesitate to set boundaries and order your dog to stick to them. If you find your Shiba Inu Husky mix exhibiting any overprotective tendencies, you must correct them immediately with obedience training.

The Shiba Inu Husky mix can be challenging to train and is not suited to all dog owners, particularly novice owners. In addition, due to his guarding and possessive nature inherited from the Shiba Inu, early socialization is needed . This will help him to become confident around other dogs and animals and get used to sharing the toys and food in the family.

If Shiba Inu Husky mix inherits his Husky parents’ temperament, he can be too busy doing everything other than training. which will be challenging to train. On the other hand, if he inherits his Shiba parent’s temperament, he will be too independent and stubborn to take part in the training. So either way, you are in for a difficult time with a Shiba Inu Husky mix pup.

Additionally, your canine will need a lot of mental stimulation to keep boredom and destructive behavior in check. Plan for puppy play puzzles and weekly obedience or agility classes to turn your puppy into a healthy, well-mannered dog.

Grooming a Shiba Inu Husky mix can be a tough job. If your Shiba Inu Husky mix inherits the characteristics of his Shiba Inu parent, you don’t have to groom him mostly. However, if he inherits a Husky’s dense and fluffy coat, it is recommended to thoroughly brush your canine every week with a pin brush and de-shedding brush.

The Shiba Inu Husky mix will be a very clean dog who will cleanse his coat all the time. An occasional bath once every two months will be sufficient. Other grooming habits such as nail clipping or ear cleaning will be the same as any other dog.

The Shiba Inu Husky mixes have their own health concerns despite the parents being relatively healthy breeds. However, timely vaccinations and regular checkups can help your dog live more years than the expected time.

Some of the health issues that a Shiba Inu Husky mix is prone to are:

Since Shiba Inu Husky mixes are vibrant animals, they need a nutritional and energy-filled diet to fuel their bodies. Therefore, they need a raw or home-cooked meal consisting of whole foods and meat. Animal proteins such as fish and chicken are a must for Shiba Inu Husky mixes to keep their digestive tracts in good health. Whole foods are required to supply vitamins and minerals, so adding them will complement the entire meal. Whole foods such as corn, greens, wheat, or even oatmeal are great options.

Typically, your Shiba Inu Husky mix will eat 2 to 2 ½ cups of food every day, and as always, ensure to feed him age-appropriate food of exceptional quality. Furthermore, keep in mind that the Shiba Inu Husky mix craves treats, so be cautious about his food intake.

Crossing two pure breeds like Shiba Inu and Siberian Husky can have a terrifying effect on the offspring. In addition, mixed breeding may pass on the health issues of the parents to their puppies. So, when crossing a Shiba Inu and a Siberian Husky, check their lineage and health records from a responsible breeder to avoid ending up with a weak hybrid pet.

On average, a Shiba Inu Husky mix puppy may cost approximately around $500 to $1000. The cost entirely depends on the sex of the puppy you chose, the location of the breeder, and the show record of the parent dogs.