Saint Bernard and Pitbull: A Comparison

Saint Bernard and Pitbull are working dogs, and so the offspring has an athletic and slender body, short and broad muzzle, deep chest, and strong legs. Saint Bernard Pitbull Mixes have floppy ears if they take after St. Bernard’s gene or perked ears if they inherit Pitbull’s gene.

One significant difference between a Saint Bernard and a Pitbull is in their coat. Saint Bernards usually have a long, fluffy coat, which allows them to remain warm in cold conditions. On the other hand, Pitbulls have short to medium-length coats. Fortunately, most Saint Bernard Pitbull Mixes will inherit their Pitbull parent’s coat. This means most of these dogs will have a medium-length coat.

The Saint Bernard Pitbull mix’s temperament would depend on the dominant parent gene and how you have raised your dog. He is affectionate, gentle, calm, patient, playful, and protective. If your Pitbull Saint Bernard mix is trained well and socialized early, he would become a well-adjusted family dog. They are most likely to be patient with the children and love to play with them. Saint Bernard Pitbull mix makes a great companion dog, and he might suffer from separation anxiety if you leave him alone for long hours.

However, we would recommend parent supervision for a few reasons like the Saint Bernard Pitbull mix can knock down a young kid as they are pretty large; children may not know how to treat dogs and may pull their ears or nose, which may offend and excite them to bite. In addition, Pitbulls may have some prey instincts, and it is highly recommended that children and other pets be with them under supervision. Saint Bernard Pitbull mixes are aggressive but, at the same time, friendly. Their aggressive nature makes them excellent watchdogs; Early socialization brings lovely pets into your home.

A Saint Bernard Pitbull mix requires adequate training to grow into a well-mannered adult dog from a young age. Training shouldn’t be too hard. Instead, be patient and consistent since the Saint Bernard Pitbull Mix is eager to please his owner. However, you need to start house training your pup as soon as you bring him home. Though both breeds are brilliant, St. Bernard’s intelligence makes the mixed breed stubborn during their training sessions. Positive reinforcements turn out to be beneficial.

Saint Bernard Pitbull Mixes love attention, enjoy spending time with their family and do everything possible to please their owners. So, reward these dogs with treats, pats, and praises to train them well. They should also be well socialized with other pets and humans from an early stage so they can be gentle and kind towards your guests and other animals.

Usually, you understand the true nature of your Saint Bernard Pitbull mix as he grows older. He’ll either be reserved or crazy-hyper. His parents’ personalities can indicate how active he’ll turn out but won’t provide accurate estimates.

Your Saint Bernard Pitbull mix will require at least 45 to 60 minutes of exercise each day if he takes after the Pitbull parent. The exercise for your dog should be in the form of walks, jogs, and indoor activities. Provide your pet with plenty of interactive dog toys to keep him occupied and mentally stimulated as he possesses high intelligence levels.

Exercise your dog a few days each week if he takes more after the Saint Bernard parent. Proper exercise is required to keep them healthy as these dogs are susceptible to obesity. However, ensure to watch out for signs of heat exhaustion during exercise, especially if your pup has St. Bernard’s long coat.

Proper grooming is essential for your Saint Bernard Pitbull mix’s well-being and your family’s welfare as well. Luckily, most Saint Bernard Pitbull Mix dogs have a medium-length short smooth coat of Pitbull, which is relatively easy to groom. However, if they acquire the long fluffy coat of the St. Bernard parent, you’ll need to groom them more often.

Brushing Saint Bernard Pitbull Mixes with medium-long coats once a week should be sufficient to reduce the shedding. However, if they inherit St. Bernard’s long, fluffy coat, you should brush their coat at least two to three times per week to help prevent their hair from lying around the house.

Besides that, you should trim their nails from time to time, clean their ears regularly and brush their teeth a few times every week.

Designer breeds like Saint Bernard Pitbull mix tend to be free from health issues that often trouble their purebred parents. However, there are possibilities for a dog to inherit specific health issues from its parents.

The Saint Bernard Pitbull mix is a large-sized dog that will require a nutrient-rich diet. High-quality dog food is ideal for all pups, and the St Bernard Mixed with Pitbull will require two meals per day. The exact amount of food needed will vary based on their age, size, and activity level.

High-quality kibble high in protein content is typically the best choice. Also, make sure to supplement your dog’s diet with Alaskan salmon oil, which provides them with omega-3 fatty acids. This is essential for keeping your dog’s coat and skin healthy. To maintain the health of your dog’s liver and kidney, give him probiotics as well. Finally, your Saint Bernard Pitbull mix will require fresh water each day.

Saint Bernard Pitbull mixes need a huge area for living as these dogs are large-sized. A home with a backyard will help your dog burn enough of his energy and help him stay healthy and active. However, Saint Bernard Pitbull mixes aren’t ideal for apartment living as they may be noisy. This is because they may inherit the barking trait from their Pitbull parent and also their vast size.

Crossing two pure breeds like Saint Bernard and Pitbull can have a terrifying effect on the offspring. In addition, crossbreeding may pass on the health problems of the parents to their puppies. So, when crossing a Saint Bernard and a Pitbull, check their parent’s lineage and health records from a responsible breeder to avoid ending up with a weak hybrid pet.

On average, a Saint Bernard Pitbull mix puppy may cost around $600 to $1200. But, of course, this entirely depends on the sex of the puppy you chose, the breeder’s location, and the show record of the parents. 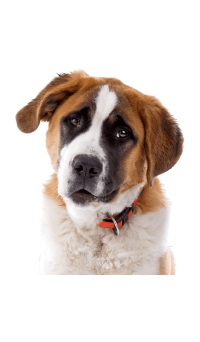 Gewehr aka gus my st.bernard/pitbull mix