Pomchi is a mix between Pomeranian and Chihuahua. They are popular toy breeds in the United States and are crossed to produce pint-sized puppies. They are graceful, loyal, playful, agile, lively, and alert. Pomchi puppies make good companion dogs.

While the Pomchis have no recorded history as a companion dog, both of his parent breeds have. Chihuahuas are either derived from 9th-century South or Central American canines or inherited from Chinese dogs that arrived in the Americas via merchants. Pomeranians, the Pomchi’s second parent breed, originated in modern-day Poland and Western Germany. Notwithstanding their actual origins, these teeny-tiny companion dogs have found a home everywhere they go.

Pomeranian Vs. Chihuahua: A Comparison

Pomchi dogs have an attractive physical appearance that sets their personality.

Pomchis like to be in the center of the stage! They are enthusiastic, loyal, agile, alert, loving, and playful puppies. They are packed with energy and will showcase it in every bit. They are passionate about cuddles from their masters and owners. However, they can also feel jealous of their owners embracing other pets! Since they have a lovely temperament, it is best to train them from their puppyhood.

Pomchis are notorious and stubborn, which makes them challenging to train. On the other hand, they are brilliant. Pomchis respond to positive reinforcement during the training sessions. Hence, it is necessary to treat and reward them when they abide by your commands. However, there will be times when they will not want to listen to your words. At this point, it is not a wise idea to take punitive measures.

Pomchis can be yappy and aggressive to strangers, but proper training can change their unruly behavior. They also have moderate prey drive, which you can mend after adequate obedience training. Pomchis will need the below-listed training:

Pomchi is a small dog with a lot of energy. This breed, on the other hand, has minor exercise demands. Each day, they require a half-hour stroll. You could break this up into two walks or out all at once.

Pomchi dog coats can be long, short, thick, thin, double, or single, and shedding isn’t a problem. Conversely, the parent breeds possess two seasonal breakouts, so anticipate the same from your mixed breed.

Regularly brushing the Pomchi coat will preserve it knot-free and matt-free. When grooming, ensure inspecting their ears and eyes, as Pomchis are known to have eye problems. Also, trim their nails and brush their teeth regularly.

Pomchi dog breeds are prone to some health issues as their purebred parents. While most are typically fit, some may be susceptible to a few health complications, which is why proper care and frequent veterinarian visits are essential. Here are the health issues which Pomchis are exposed to:

Cataract: As in humans, canine cataracts are characterized by cloudy spots on the eye lens that can grow gradually. Cataracts may develop at any age and often don’t damage vision, although in some cases cause vision loss. A board-certified veterinary ophthalmologist certifies the breeding dogs after testing them free of hereditary eye disease before breeding. Usually, you can remove cataracts surgically with good results.

Progressive Retinal Atrophy: Many eye infections involve the retina’s slow deterioration. In the initial phases, puppies become night-blind. As it progresses, they lose their eyesight during the daytime as well. However, most canines slowly adapt to their slight or complete sight loss as long as their home surroundings remain the same.

Hypothyroidism: Hypothyroidism is a condition in which a dog’s metabolism is slowed, due to the lack of thyroid hormone production. Among the signs and symptoms are:

Epilepsy is the most prevalent neurological disease in canines, concerning about 0.75 percent of the population. Epilepsy is a broad name for disorders characterized by repeated, uncontrollable seizures caused by a brain defect.

Corneal Dystrophy: Corneal Dystrophy is an inherited illness that affects the corneal layers of the eyes. It is not a painful ailment, although some Pomchis exhibit signs such as forming an opaque coating.

Glaucoma: It is caused by increased pressure in the eye and is found in two forms: primary, which is hereditary, and secondary, which is caused by the decreased fluid in the eye. Symptoms include pain and loss of vision. Treatment includes surgery or eye drops.

Patellar Luxation: When the dog patella (kneecap), which typically lies in the cleft of the femur (thighbone), slips out of position, it is known as luxating patella. Your dog may feel periodic hind limb “skipping,” lameness, or locking up the leg at an abnormal angle if the patella luxates.

Entropion: Entropion is when the eyelid rolls inward, irritating the eyeball from eyelashes rubbing on the surface. In critical cases, entropion can cause a corneal ulcer. The treatment for this disease is surgical.

Hydrocephalus: This is a comparatively rare disease experienced by smaller canines. Dogs with this disease have cerebrospinal fluid (CSF) inside their heads that cannot drain. This puts a lot of pressure on the brain, leading to lousy vision or blindness, seizures, restlessness, trouble learning commands, and coma.

Periodontal Disease: Bacteria that cause periodontitis can damage your dog’s mouth. Typically, this illness invades the mouth quietly, and you won’t notice any noticeable indications or symptoms until it has progressed. On the other hand, gum disease can cause persistent discomfort, gum erosion, tooth and bone loss.

Open Fontanel: Open fontanelles are gaps in the skull caused by inadequate encapsulation of the soft areas of the head during typical puppy growing. Although many dogs’ weak spots seal entirely by the time they reach 9 to 12 weeks of age, some smaller breeds, such as toy and teacup dogs, continue to have their holes through puppyhood.

Pomchi will only require 1.5 to 2 cups of food per day, mainly developed for small dogs with high energy levels. Because this breed of dog has a propensity to gain weight, you should be vigilant about the quantity of food you provide. Plan meals at regular intervals during the day and don’t leave food on the counter. Dogs with dental and gum disorders, such as the Pomchi, should eat dry kibble rather than wet canned food. Make sure the food you’re giving your small dog satisfies their daily necessities; the Pomchi will require:

A Pomchi consumes 40 calories per pound of body weight each day in general, thus if your dog weighs 8 pounds, he would require:

Pomchi fits into most settings, notably flats, micro houses, and mobile homes, because of its small size. These adventurous puppies might lose sight of their frailty at times. Despite their boldness, they must be exposed to children, dogs, and other pets with caution so that they do not damage themselves. Children and adults must respect Pomchies’ space and enable them to interact with people on their terms. They might be apprehensive or skeptical of new people at first.

Things to Remember Before Adding a Pomchi To Your Family

Adding a Pomchi to Your Family

Adding Pomchis to your family will need proper research about their parent breed, cost, breeders, health, certificates. Then, get your Pomchi from a reputable breeder who will provide you with the vaccination certificates and gene testing certificates. Also, ensure the health of the puppy’s parent breeds.

The price of a Pomchi puppy may range from $500 to $1500. The cost varies according to breeders. Therefore, you must choose a reputable breeder to get your puppy. 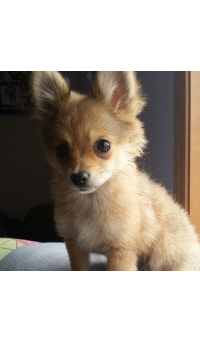 Pomchi- The Ultimate Owner’s Guide That You Need To Watch!!! (Compilation Video)

Pomchi: A Pet Parent’s Guide To The Pomeranian Chihuahua Mix