The Pitbull Boxer Mix, also called the Bullboxer, is a mix between a Pitbull and a Boxer. With both parents familiar as historic fighting dogs, Bullboxers often have a poor reputation as being aggressive, but this isn’t true!

Bullboxer dogs are loyal and energetic companions for any family, and their intelligence makes them playful and fun-loving dogs. As the Pitbull Boxer Mix is a hybrid breed, we cannot determine what parent they will take after most. A Bullboxer may look like their Pitbull parent or like their Boxer parent. One thing is sure that, with the correct socialization, these dogs are excellent family members.

Being a mixed breed, a Pitbull Boxer Mix is not registered with the American Kennel Club (AKC) or the United Kennel Club (UKC). However, they are recognized by the International Designer Canine Registry(IDCR), the American Canine Hybrid Club (ACHC), and the Designer Breed Registry (DBR). Unfortunately, it isn’t easy to know where the Pitbull Boxer Mix originated from, so we can look at the parent breeds in more detail to understand the origins of this dog.

Pitbull Vs. Boxer: A Comparison

As mentioned earlier, it can be challenging to determine the exact characteristics of the Pitbull Boxer Mix because they may take after any of the parents more than the other. Nevertheless, we can make assumptions based on past litter.

The parent breeds will indicate what your Pitbull Boxer Mix may look like when fully grown. Usually, these dogs develop the longer snout their Pitbull parent has, so they don’t suffer from brachycephalic health issues. Boxer Bulls have large wide heads, short muzzles, elongated legs and broad chests of Boxers, and short, silky coats. Pitbull Boxer Mix size depends on which type of Pitbull was used for breeding. The American Pitbull Terrier is the largest breed of Pitbull and will eventually produce the largest dogs. Bullboxers usually mature between 12 to 18 months of age, weighing between 30 to 80 lbs, and stand between 17 to 25 inches.

The Pitbull Boxer mix has a fun-loving, even-tempered nature, so it usually fits most families well. However, these dogs are famous for their alertness and territorial tendencies, making them good watchdogs. Due to their loyalty and muscular body, Boxer Bulls make excellent farm dogs and guard dogs.

Boxer Pitbull mixes have a more stable temperament and can be aggressive if not socialized early. However, they like staying close to their family, so many are loving and loyal companions. Proper training is key to reducing the likelihood of aggression in the Boxer Pit mix. You can keep your Boxerbull from turning into an overprotective guard dog by introducing him to as many animals and people as possible. If they are socialized early and treated with love and respect by the people around them, these hybrids can be such a joy.

Constantly supervise them when a Bullboxer is around kids, as his high energy levels can make them hyperactive or over-excitable. A well-mannered dog reflects his owner, and how your Pitbull-Boxer mix turns out depends on how you raise him.

Despite their parent breeds’ intelligence and hardworking nature, training a Pitbull Boxer mix can be tricky and challenging since this dog can be stubborn and boisterous. Show him who’s the leader by being assertive. Be gentle yet consistent while teaching commands to your dog. Use rewards and lots of praise as an act of positive reinforcement to encourage him to be obedient. If you think these dogs can take punishment when not obeying, you can be wrong.

Punishing your dog will likely result in aggression. However, if you feel that you aren’t progressing in training him, you can always enroll your Pitbull-Boxer mix in training classes.

The Pitbull Boxer mixes require a lot of physical activity as they come from strong, muscular purebred parents. If you’re looking for a furry friend to walk, run, or hike with you, this hybrid will make for an excellent companion. Help your Boxer Pit mix burn his energy through hour-long brisk walks twice a day for an hour or 20-30 minutes of running.Give your dog a 5-minute break and some water to hydrate and cool off if you notice him slowing down and panting.

If you cannot take your Pitoxer outside for some reason, keep him occupied by giving him durable chew toys that can hold up against his powerful jaws and love for chewing.

Ensure to give your dog the exercise it needs. Low physical activity can lead to barking, frustration, digging, and destruction. These are tips for a full-grown Pitbull Boxer mix. You can start with short walks and indoor play-up until they’re around one year old.

Grooming the Pitbull Boxer mix won’t be much problem as they have a short, sleek coat.

Brushing his coat once a week will be sufficient. You can use a bristle brush or a grooming glove for ease. These hybrids may shed more during the late fall and the late winter, so you’d need to double up the brushing to twice a week. Unfortunately, the Bullboxer’s coat is not hypoallergenic due to its moderate shedding. 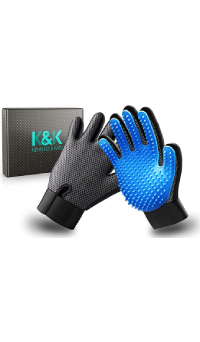 Other grooming requirements include regularly trimming the nails, cleaning their ears, wiping their eyes, and brushing their teeth.

The Pitbull Boxer mixes are generally considered healthy dogs that you’d expect from an athletic breed. However, they can suffer from some common health problems. As with any other dog, it is essential to maintain good care and plan regular veterinary checkups.

Some of the possible health ailments in Pitbull Boxer mixes are:

Hip Dysplasia: Hip Dysplasia is a painful, life-threatening condition caused when the bones of the rear legs don’t fit properly in the joints. Hip dysplasia is primarily hereditary, but injuries, excessive weight gain, and wrong exercises can cause hip dysplasia. Some dogs might exhibit symptoms, while some might not. Treatment ranges from medication to replacement of the hip through surgeries. Avoid breeding Pitbull Boxer mixes with hip dysplasia parentage to prevent this condition, and undertake regular checkups.

Obesity: Obesity is a  notable health disorder in Pitbull Boxer mix, which is due to excess weight resulting in back pain, digestive disorders, joint problems, and heart diseases.

Cardiomyopathy: In cardiomyopathy, the heart muscles become weak and thin. It can be identified through widening heart chambers, an abnormally large heart, and heart failure. Treatments include fluid therapy, oxygen supply, and medication.

Allergies: Pitbull Boxer mixes are predisposed to react adversely to food allergies. These allergies happen due to low-quality elements in their food.

Cancer: Boxer Bulls are prone to cancer as they grow older. Cancer can be cured by surgical removal of tumors and chemotherapy. It is essential not to ignore the symptoms and diagnose them earlier.

Demodicosis: It is caused by the presence of Demodex mite in the hair follicles. Demodicosis is passed on to the pups from their mother, and the dogs with compromised or weak immune systems are prone to the disease. The symptoms include scaly patches of red, skin with hair loss on the head, neck, forelegs, or extreme conditions all over the body.

Eye Diseases:  Boxer Bulls can be prone to these eye diseases:

Thyroid Dysfunction: A condition where there is an abnormality in the thyroid hormonal levels which leads to hyperthyroidism or hypothyroidism.

Hypothyroidism: Hypothyroidism is a condition in which a dog’s metabolism is slowed, due to the lack of thyroid hormone production. Among the signs and symptoms are:

Hyperthyroidism: When there’s excessive thyroid hormone secretion, it results in hyperthyroidism. Symptoms include anxiety, weight loss, and diarrhea. It can be inherited from the parent breeds.

A protein-rich diet is essential for healthy bones and joints, and a regular intake of fish oil can help keep the Bullboxer’s skin, heart, kidneys, and joints healthy.

Boxer Bulls need 4 to 5 cups of dry dog food a day, split into 2 or 3 meals. If your dog has an average activity level, they’d need around 1,500 to 1,600 calories a day. Aside from food, ensure your dog has clean drinking water. You have to regulate your dog’s meals as they tend to gain weight quickly.

Pitbull Boxer mix dogs live comfortably in spacious areas. However, as they are high on energy, they are not fit for apartment living and tiny houses. Instead, they do well in homes with a backyard where they can roam and play. In addition, they are sensitive to extreme weather conditions. So, do not leave your pet outside if it is too hot or too cold for an extended time.

Adding a Pitbull Boxer Mix to Your Family

Things to Remember Before Buying a Pitbull Boxer Mix

Ensure to get a Pitbull Boxer pup from a trustworthy breeder. They ensure the wellness and happiness of both the puppies and their parents. In addition, they should provide health clearance documents and gene tests for a vaccinated pup.

A Pitbull Boxer mix puppy may cost around $500 to $1000. This entirely depends on the sex of the puppy you chose, the breeder’s location, and the breeder’s show record of the parents.

All about the Pitbull Boxer mix (Bullboxer) | Should you get a BullBoxer?