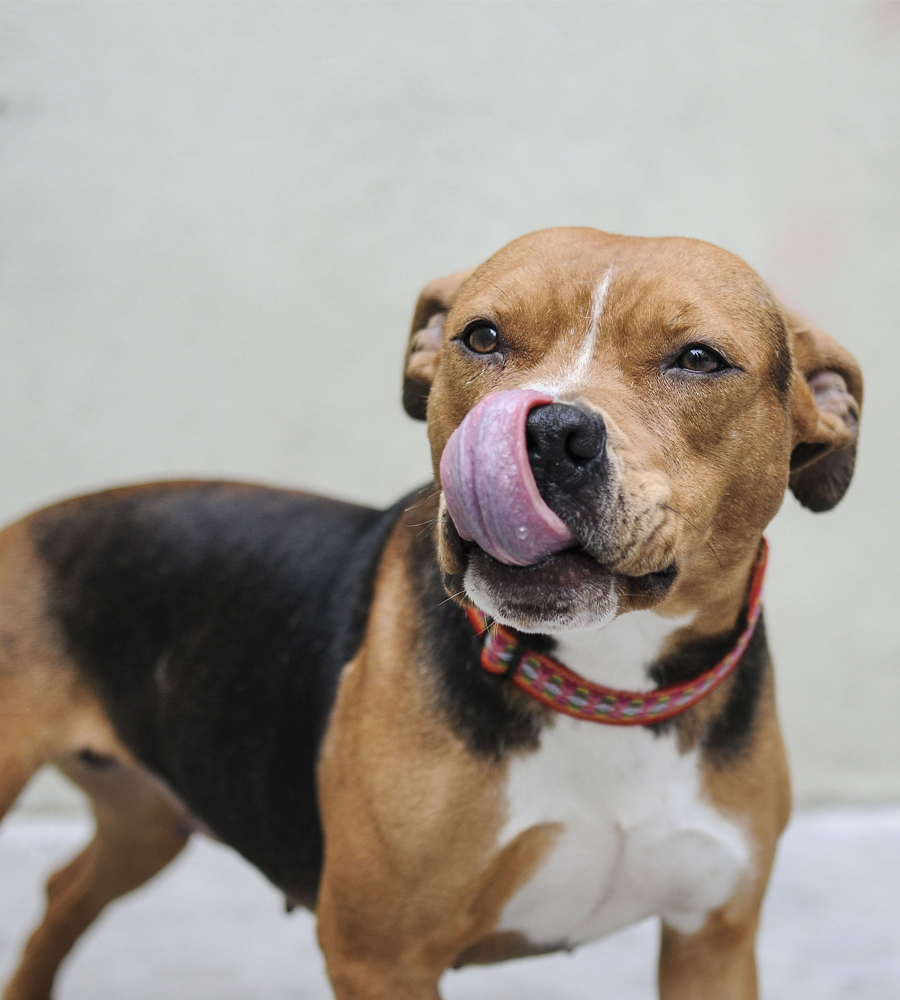 The Pitbull Beagle Mix is an adorable mixed dog breed that is a cross between a mighty Pitbull and a cute Beagle. These dogs find their origin in the United States of America, which are loving, friendly, intelligent, and loyal canines. The Pitbull Beagle Mix is a little dog with mixed features whose looks are absolutely treat to watch and a sweetheart personality-wise.

The Pitbull Beagle mix is an adorable dog breed of medium size with an often short coat. These dogs usually share the features of both their parent breeds equally. The Pitbull Beagle mix stands tall about 18 to 20 inches and weighs around 30 to 40 pounds. Most of the Pitbull Beagle mixes capture the muscular body and friendly nature from their Pitbull parent and inherit floppy ears and large round dark colored eyes(occasionally light blue) from their Beagle parent.

The Pitbull Beagle mixes are a package of different emotions. They inherit the sweet, loyal, and loving nature from their Pitbull parent, at the same time are stubborn, howl a lot, and may suffer mild separation anxiety like their Beagle parent. Due to this partly Beagle nature, Pitbull Beagle mixes can be challenging to train despite high intelligence.

Early socialization is essential for any breed, but considering the Pitbull Beagle’s solid body and strong-willed nature, it’s even more crucial.

The Pitbull Beagle mix may tend to be stubborn during training despite his brilliance.

Consistent training, patience, and positive reinforcement that includes treats, will help your Pitbull Beagle mix learn things quickly. Chewing and digging are behaviors found in both parents and may prove challenging to resolve.

Pitbull Beagle mixes are medium to high energy dogs that surely need regular exercises to stay motivated and happy. They require at least 60 minutes of exercise that includes a long walk or jog. If not, they might become destructive. So plan appropriately before adding a puppy to your family as Pitbull Beagle mixes imperatively expect daily playtime sessions. Always have your Pitbull Beagle mix on a leash so that you don’t find him missing due to his high prey drive and incredible nose that will sense a smell from miles away. On the other hand, these dogs are highly sociable that do well with strangers and other pets in a family when perfectly trained and exercised. So, if you find any abnormal behavior from your canine, you can also be one of the reasons.

It is pretty easy to groom a Pitbull Beagle mix dog. The short, sleek coat of this breed requires brushing only once a week using a slicker brush. However, since the Beagle has a dense double-coat, your Pitbull Beagle mix may shed moderately year-round and even more during the shedding season. Therefore, regular baths are not required for this breed unless your canine smells odd or feels dirty.

The Pitbull Beagle mix dog’s ears should be checked and washed once a week to keep them clean; restrict wax build-up and ensure that your dog is infection-free. Nail trimming and dental brushing are similar to any dog.

Generally, Pitbull Beagle mix is a healthy dog breed with a life expectancy of 10 to 16 years. Despite being a mixed breed with good health, these dogs are also prone to few diseases that might affect them during their lifetime. For example, they inherit  obesity from their parent breeds. So, it is suggested to check the parent lineage for health clearances of both the breeds before breeding or owning one.

The list of the diseases that a Pitbull Beagle mix is prone to are:

The Pitbull Beagle mix breed is classified as a medium-to-large breed and requires substantial food every day. Your Beagle Pit will need approximately 3 cups of highly nutritious dog food when fully grown. However, that doesn’t mean they’ll want to eat it all up right away. These dogs are prone to being overweight, so feeding the right amounts of food is also suggested. In addition, Pitbull Beagle mixes can be picky about which food they prefer and for how long. As a result, you may find yourself swapping out kibble brands from time to time to find the right one for your pup.

The Pitbull Beagle mixes can do well both in an apartment and houses with a backyard until they get the required amount of activity which keeps them happy and motivated. These dogs suffer from separation anxiety, so it would be better to accompany them as much as you can.

Crossing two pure breeds like Pitbull Terriers and Beagles can have a terrifying effect on the offspring. In addition, crossbreeding may pass on the health problems of the parents to their puppies. So, when crossing a Pitbull Terrier and a Beagle, check their parent’s lineage and health records from a responsible breeder to avoid ending up with a weak hybrid pet.

On average, a Pitbull Beagle mix puppy may cost approximately around $500. This entirely depends on the sex of the puppy you chose, the location of the breeder, show-record of the parent dogs.