The Merle French Bulldogs are one of the most popular varieties of French Bulldogs. The characteristic features that differentiate these dogs from French Bulldogs’ pure breed include their unique coat pattern and saliant blue eyes. These features occur due to the presence of a gene called merle. In a merle French bulldog, these genes lighten the base coat and create dark patches. Although these dogs can have several different markings on their coat, they include dark brown or black. The dominant color is usually white, cream, or fawn, all mixed with dark colors.

Additionally, this gene may cause random pigment dilution, which lightens their eye color. For this reason, they are rare to find and are the most preferred dog breeds. Physically, they resemble French Bulldogs with their stout bodies and bat-shaped ears. In addition, they have a cordial and faithful nature which makes them a popular choice of pet.

They come in various colors, but some of the rarest types of Merle French bulldogs include:

Lilac merles are the most uncommon canines that cannot be spotted easily. Its unique coat color is a result of a combination of blue, red, and chocolate. However, the dominance of blue is diluted; hence the coat appears lilac in color. Additionally, they have blue-colored eyes, which last for their lifetime and indicates underlying health conditions.

Black merles are predominantly seen in the merle pool. Due to the presence of a dominant black gene, these merles often have blue or brown eyes. Occasionally, they may develop a combination of both the colors or one brown and one blue eye.

Blue merles have a distinct blue and white coloring. These Merles are black, but their colors have been diluted, resulting in a blue hue. They also have light blue eyes that they carry throughout their lifetime.

The Merle French Bulldog resembles a standard pure breed French Bulldog with its trademark miniature size and bat ears. A large square head characterizes them with a short nose above which heavily wrinkled skin can be found. They have a compact and muscular body. The Merle French Bulldog’s striking difference is seen in their coat. Their coat features a base color with patches of irregular or regular stripes and spots of different colors. The presence of these peculiar patterns makes them the most sought-after breed. Another distinctive feature is vibrant blue eyes, caused due to the gene ALX4 or merle. Alternatively, a French bulldog without ALX4 gene will probably have brown eyes. The blue color of the eyes may also arise when these dogs have low melanin levels or low amounts of amino acids. They are highly adaptable dogs and don’t need much exercise, making them suitable for apartment life.  They get along well with other pets, kids, and people, which makes them companionable.

The Merle French Bulldogs are affectionate, playful, charming, and alert. These intelligent canines make excellent watchdogs. Additionally, these dogs are passionate about people; hence, they demand attention and love from them. Due to their charming nature, they can be trained easily. They bark less and are fun to be around, which makes them adorable. However, a lack of proper training may make them headstrong, aggressive, and bark often.

The Merle French Bulldogs are easily trainable, provided you take advantage of their compliant, humorous and intelligent nature. They have short attention spans but can learn quickly. They respond well to positive reinforcements and rewards. Since they are prone to obesity, it is essential to strike a proper balance between their daily diet and treats. They are not aggressive dogs; hence, obedience or agility training is unsuitable for them. Additionally, they are known for their stubbornness which calls for a firm and consistent approach.

Merle French Bulldogs are not energetic dogs; hence, they don’t require much exercise. However, a minimum activity of 30 minutes to 1 hour is necessary to keep them away from obesity. Additionally, exercise allows them to improve their stamina and promotes coordination. Simple exercises like walking once or twice a day is adequate for them. However, you must avoid putting them through strenuous activities as they can quickly develop breathlessness due to their short snouts. Furthermore, these canines require supervision while around water as they are prone to drowning due to their short legs.

Merle French Bulldogs don’t shed much. Hence, they need only less maintenance. A regular hair brushing once or twice a week helps in keeping them clean and minimizes shedding. Additionally, bathing them every 2 to 4 weeks is sufficient. It is essential to clean the wrinkles above their nose to prevent skin infections. Peroxide and moisturizers are good choices. Additionally, their teeth have to be brushed every day or two as they are prone to dental issues like inflamed gums, tartar buildup, and bad breath. Apart from these, their ears have to be cleaned, and their nails are to be trimmed.

Merle is the gene responsible for the particular coat in Merle French Bulldogs. Unfortunately, the presence of this gene also leads to significant health defects related to the ears and eyes. Additionally, these dogs develop a bunch of complications as they are crossbreeds. When a merle is crossed with another merle, the offspring carries two merle genes. These animals are called Double merles. The double merle breeds have a greater chance of developing deformations, so they suffer from serious health issues. Therefore, it is always best to buy a puppy that carries a single merle gene. Some of the possible complications include:

Some of the other complications include:

Hip Dysplasia: Hip dysplasia is hereditary. It occurs when the hip joints don’t fit into the socket of the hip bones properly. This condition causes defect or injury to the hip bones, joints and worsens without treatment.

Juvenile Renal Dysplasia: A genetically inherited disorder in which the kidneys dysfunction. Although there are no tests to determine this condition, it can be identified with the below symptoms:

As Merle French Bulldogs are prone to diseases, feed them a healthy and balanced diet. For this reason, you may prefer a diet consisting of organically sourced ingredients. Additionally, their diet can be supplemented with multivitamins that fuel their immunity and coat health. You can also opt for supplements like chondroitin, glucosamine, and MSM to help deal with arthritis and spinal problems.

The Merle French Bulldogs have short coats, so they need protection against cold weather conditions. For this reason, you may have to keep them covered with jackets or sweaters while taking walks during the colder months. Similarly, their smaller snouts make it difficult for them to adjust to hot weather. Additionally, these dogs are prone to separation anxiety; hence they shouldn’t be left alone for long.

It is vital to consider the health issues that may occur due to the cross between the breeds. Additionally, no two Merle dogs should mate, resulting in double merle offspring, which are quite unhealthy. As these dogs have narrow hips, the probability of a complicated delivery is high. Therefore, these dogs generally deliver their puppies through C-section. This situation calls for the availability of high-quality food and clean drinking water. So, check their parent’s lineage and health records from a responsible breeder to avoid ending up with a weak pet.

On average, a Merle French Bulldog mix puppy may cost around $6,000 to $8,000. The rarest Lilac Merle has been spotted at close to $30,000. This entirely depends on the sex of the puppy you chose, the breeder’s location, the show record of the parent dogs.

Adding a Merle French Bulldog to Your Family 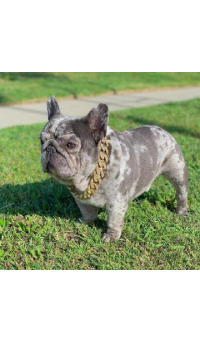 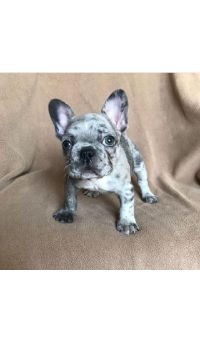 Adding a Merle French Bulldog to Your Family

The rarest lilac merle has been spotted at close to $30,000.