Labradoodle is a cross of two purebreds, Labrador Retriever and Poodle, a friendly watchdog who inherited all traits from both their parents. Initially, they were designed to serve as hypoallergenic guide dogs. Labradoodles soon became famous for their joyfulness and gentleness. Usually, they are medium-sized hybrids, but their weight may differ depending on the parents’ size because the Poodle may be a toy, miniature, or standard-sized. So, naturally, this will affect their body weight.

Labradoodles are easier to train, making them suited for novice owners. However, they are stubborn, enthusiastic, and need mental and physical stimulation. They are adorable family puppies with bright eyes and abundant hairy coats. They are loyal and smart, making them an excellent partner for families of all sizes and shapes. They can quickly get along with children, dogs, and other pets.

The Australian Labradoodle Association of America (ALAA) defines them as medium-sized, compact dogs with high intelligence, an athletic build, a non-shedding coat, and a stable temperament. These hybrids also maintain a unique ability to gauge the necessities of people around them. In addition, the ALAA signifies exceptional guide dogs and excellent companions for humans with special needs. Labradoodles may exhibit signs of separation anxiety when they are left alone for long periods.

Labradoodles are known for the following personalities:

Labradoodles’ personality is a blend of Labrador and Poodle breeds. Lab and Poodles are opposite ends of the spectrum regarding size and appearance. The Labradoodle’s size will depend on whether the parent Poodle is a toy, miniature, or standard.

They will have an athletic gait, shaggy, hypoallergenic coat (wool or fleece), triangular-shaped floppy ears, long muzzle, small eyes, fluffy tails, and they come in various colors, including

Labradoodles are well-known for their unique companionship and charming personalities. They make exceptional family pets and are patient with kids. Unfortunately, their prey drive can cause undesirable demeanors such as chasing and digging. However, proper training and early socialization at a young age can help curb all their detrimental traits.

Labradoodles are known for the following temperaments:

Perfectly groomed, elegant, and athletic Labrador Poodle mixes are winning hearts. Thanks to their Labrador parent, Labradoodles tend to be quite curious. They can be sociable and caring like Labs or aloof and suspicious like Poodles. They may bark at strangers, but their Labrador instincts will allow them to become companions once they feel secure. Unsurprisingly, considering their mix, Labradoodles love the water and can be excellent swimmers.

If you are getting a Labradoodle, ensure you have enough time and energy to keep them engaged. These designer hybrids are people-pleasing and human-oriented at all times. However, they might have stubborn dispositions that can change with proper and continuous training.

Labradoodle’s temperament depends on their experiences in their earlier life; well-socialized pups grow into clever, quick, and playful grown-ups inheriting the Poodle’s brains and Lab’s self-determination. They are vocal and alert, making them ideal watchdogs, and you can efficiently train them as they constantly crave to learn something new. Brain stimulation is as essential as body training, so they should not be left alone for extended periods. They might get nervous and restless, resulting in excessive chewing or barking.

Labradoodles can easily get along with other canines, especially those living in the same family. If you socialize them with other pets from an initial age, they will be heartily welcome outside or at the park throughout their lives. But, ensure not to be trained to chase them as these hybrids have a prey drive and will not easily get along with smaller pets like gerbils and ferrets.

The Labradoodle’s energetic disposition and inquisitive nature make these hybrids fun and easy to train. Training should be easy as long as positive reinforcement and consistency are the techniques. They make an excellent companion for first-time owners since they don’t need a substantial hand. Also, they don’t respond well to mistreatments and violence.

Here are some of the training activities that you need to do with your Labradoodle:

Labradoodles are high-energetic puppies who need mental and physical stimulation for optimum health. Thus, they need at least 30 to 60 minutes of daily exercise, which is also an excellent way to combat their inclination toward obesity. However, they make an ideal jogging companion and require some off-leash time to burn off steam. They have to be stimulated intellectually, they are active and intelligent, so Labradoodles can be a destruction machine once they are bored.

Exercising your Labradoodle should not be a burden for you or your puppy. You can meet their daily exercise needs by:

Both the pure breeds, Labradors and Poodles, are low shedders. Labradoodles are hypoallergenic, low-maintenance designer breeds that are generally healthy.

Labradoodle’s grooming requirements are as follows:

Commonly, designer breeds like Labradoodles are healthier than their purebred heritage because of crossed vigor. But there are possibilities of inheriting health diseases from their parent breeds.

Cataracts: A disorder caused due to the eye lens thickening, resulting in foggy vision. You can cure this disease either with surgery or proper medication.

Hereditary Nephritis: This disorder mainly appears at a young age due to undeveloped kidneys or kidney malfunction resulting in a high UP: UC (Urine protein: Urine creatinine) ratio and kidney failure.

Sebaceous Adenitis: An inherited condition most common among standard Poodles characterized by inflammation and the gradual collapse of the skin’s sebaceous glands. The lack of this gland exhibits symptoms in dogs aged 1 to 5 years, such as:

Von Willebrand’s Disease: This disorder is a genetically transmitted blood disease indicated by an inability to clot.

Epilepsy: The expected cause of epilepsy is inheritance, and it shows itself in mild or severe form.

Hip Dysplasia: A genetic disorder that occurs when the thigh bones fail to fit correctly into the pelvic socket of the hip joint.

Hypothyroidism: A condition where an underactive thyroid gland results in hypothyroidism.

Ear Infections: Poodle’s floppy ears are the main reason for the ear infections in this breed. The shape of their ears is liable for trapping moisture and causing the infection.

Elbow Dysplasia: A degenerative disorder caused by abnormal growth and development of the elbow joint. Weight control, anti-inflammatory medicines, and surgery are the potential treatments.

Allergies: Inhalant allergies, food allergies, and contact allergies are the most familiar allergies in Labradoodle. Allergies can be cured by environmental changes, dietary restrictions, and medication.

Diabetes Mellitus: A disorder in which beta cells of the endocrine pancreas limit or stop insulin production. Insulin treatment can aid in treating the condition.

Progressive Retinal Atrophy (PRA): A condition similar to retinitis pigmentosa in humans. The state is concerned with the slow deterioration of the retina. A canine is a night blinded in the early stage of the condition, followed by complete blindness.

Labradoodles need high-quality dry dog food, preferably natural vegetables, fruits, meat, and grains or additives, considering their age, weight, health, and metabolism. They will consume between 1 to 2.5 cups of dry food daily to stay healthy and fit; you can split it into two or more small meals. This can also lower their possibilities of gastric torsion or bloat. Labradoodles are exposed to hip and elbow dysplasia, so enhance their meals with glucosamine, chondroitin, and fish oil, including a constant fresh water supply.

Labradoodles are active, high-spirited hybrids that can quickly adapt to living in city or suburban environments and do well in rural settings despite their activity levels. However, they need lots of exercises to maintain them physically and mentally stimulated. In addition, they desire human companionship who can value and satisfy the needs of these loyal, devoted breeds. Labradoodles may discover an unwanted outlet to keep themselves occupied when bored or lonely, such as chewing or barking. These breeds should not be left alone for long periods, mostly without toys to keep them engaged.

Adding Labradoodle to Your Family

Things to Remember before Buying a Labradoodle

Always make sure to get a Labradoodle puppy only from a reliable breeder. They ensure the health and happiness of both the puppies and their parents. In addition, they should provide health clearance certifications and gene tests for a vaccinated pup.

Cost of a Labradoodle

Labradoodles can range from $1200 to $3000, not including miscellaneous costs. 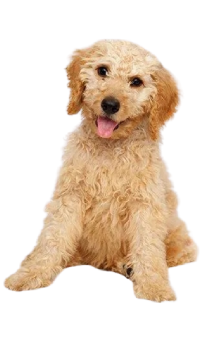