Keeshond bears a square, sturdy build. With their physique, they are generalists and not specialists. However, their gait is unique, brisk, and bold. Keeshonds have long, straight, rough outer coats with thick undercoats. Double coats provide good insulation from cold. They are excellent therapy dogs, lovable and affectionate in disposition. This makes them people’s companions.

Keeshonds were based in Germany. They were believed to result from crossing the Pomeranian, the Chow Chow, the Norwegian Elkhound, and the Finnish Spitz. They were earlier named the German Spitz, then Wolfspitz, and now Keeshonds.

Keeshonds were hard, nimble-footed dogs, kept as guard dogs for years. They were great companions while traveling in ships. History has a place for these Keeshonds, and they were symbols of the Dutch Patriots Party during the eighteenth century. The name might have referred to a patriot mascot dog known as Kees, and there is another historical information that says two different patriot leaders gave the nickname “Kees.”

Keeshonds are medium-sized dogs that belong to the spitz family. They have long, double coats and are square and sturdily built. They have a typical fox face, pointed ears, and an exuberant topline with a plumed tail high on the back, similar to their cousins Pomeranian and Samoyeds. They are known for the shades and markings around their eyes. This gives the Keeshonds on the qui vive expressions.

Keeshonds have a mixture of all the traits of a perfect family dog. They symbolize Dutch patriotism and are mediumly energetic, playful, affectionate, and adventurous dogs. They are sensitive, and dog owners should take care of handling them with perseverance and love. They are very adaptable to environments. Considering all these traits, Keeshonds make great companions for any family member. They are vigilant, and this makes them a perfect watchdog.

Keeshonds are intelligent, quick learners, and highly trainable dogs. They can excel at obedience training, as well as agility. They have also excelled in therapy work. They love to please, so they learn and do skills quickly. They should be trained while they are 10 to 14 weeks old. Early socialization and training can make them good dogs.

Keeshonds are active chewers. Keenly watch your pets and keep great chew toys on hand to keep him occupied. In addition, Keeshonds love playing in the water. They use their paws to splash water out of their dog bowl. Finally, Keeshonds can be a digger, leaving holes in his wake as he looks for mice and moles.

Keeshonds can be bred in homes with a lot of space to run or small rooms. However, they need regular exercise. Running and walking are activities that they can be happy with and get stimulated physically and mentally. However, they cannot resist being alone, and they need someone who spends some quality time.

Keeshonds require regular grooming. Pet owners would need to brush their hair once a week. This makes the undercoat brushed and makes them low shedders. Trim the hair around their feet, pads, and hocks. Pet owners can bathe and blow-dry every four to six weeks. Other grooming requirements include regular nail trimming, proper dental care, and checking ears and eyes for allergies or infections.

Keeshonds are generally healthy, active breeds with a life span of 12 to 15 years. However, the Keeshond Club of America recommends health tests before breeding Keeshonds. They include screening for Hip and Elbow Dysplasia, examination for Patellar Luxation, Eye examination, and genetic screening for hyperparathyroidism.

Addison’s Disease: This is a severe condition with less adrenal hormones production. Affected canines may have a poor appetite, vomiting, and lethargy. Since these signs are common, they would be mistaken for other health conditions till it reaches advanced stages. Severity is seen when the potassium levels get high and intrude with cardiac functions, which can cause severe shock and even death.

Some dogs might exhibit symptoms, while some might not. Treatment ranges from medication to replacement of the hip through surgeries. To avoid this problem, do not crossbreed with a parent who has the issue of hip dysplasia. Regular checkups are suggested.

Thyroid Dysfunction: A condition where the thyroid hormone levels are abnormal. This leads to hyperthyroidism or hypothyroidism.

Mitral Valve Disease: In this condition, the weakening of their heart valves causes blood to flow back into the atrium, leading to cardiac failure. Veterinarians can detect it early, so it’s crucial to keep up with their regular examinations.

Epilepsy:  The often-inherited Idiopathic epilepsy frequently causes seizures and can occur in moderate and extreme frequencies. Unusual actions, such as desperately running as chased, stumbling, or hiding, may signify an attack. Seizures are alarming, but dogs with idiopathic epilepsy have a very favorable long-term prognosis. Seizures may be caused by various things other than idiopathic epilepsy, including metabolic conditions, respiratory diseases of the brain, cancers, toxin poisoning, and extreme head trauma.

Skin Problems: The continual scratching or licking of paws can be annoying, but don’t blame your dog for his bad behavior; the skin issue is to be blamed. Parasites, allergies, and underlying sickness are all possible reasons. The following are the symptoms of skin problems:

Heart Disease: It causes abnormal heart murmurs and heart rhythm. The best way to diagnose is through an X-ray, an ECG, or an echocardiogram. Treatment includes medication, dental care, and weight control.

Patellar Luxation:  Knee Dysplasia, also known as Patellar Luxation, is a condition that affects both the parent breeds. The dislocation of the knee cap can be excruciatingly painful, causing the dog to avoid leaning on the injured leg.

Signs of the luxating patella in dogs:

Progressive Retinal Atrophy: Many eye infections involve the retina’s slow deterioration. In the initial phases, puppies become night-blind. As it progresses, they lose their eyesight during the daytime as well. However, most canines slowly adapt to their slight or complete sight loss as long as their home surroundings remain the same.

Cataracts: As in humans, canine cataracts are characterized by cloudy spots on the eye lens that can grow gradually. Cataracts may develop at any age and often don’t damage vision, although in some cases cause vision loss. A board-certified veterinary ophthalmologist certifies the breeding dogs after testing them free of hereditary eye disease before breeding. Usually, cataracts can be removed surgically with good results.

Von Willebrand’s Disease: The most prevalent hereditary bleeding problem in dogs is Von Willebrand’s disease (VWD). It’s caused by a lack of a specific protein that helps platelets (blood cells that aid with clotting) adhere together and form clots to close damaged blood arteries. Von Willebrand factor is the name of the missing protein (VWF).

Allergies: Keeshonds can be allergic to various substances, ranging from food to pollen. If your dog licks his paws or rubs his face a great deal, get him checked by your veterinarian.

Health clearances from the following organizations are suggested for your Keeshonds:

A healthy diet quantity prescribed by the vet containing high-quality dry dog food should be divided into two meals, depending on your dog’s size and age. Keeshonds relish fish-based diets that are low in carbohydrates.

Keeshonds are more suitable for cold weather conditions than hot weather conditions. They are very affectionate and can make great family pets. They can live in both kinds of housing style, house with yard or apartment style of living.

Adding a Keeshond to Your Family

Cost of a Keeshond puppy

To Buy a Keeshond Online 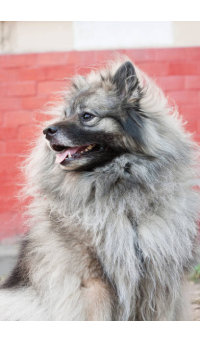 What is a Keeshond?