Jack-A-Poo is a cross between Jack Russell Terrier and Poodle breeds (Toy or Miniature). Jack-A-Poo brings together the best characteristics of both his parent breeds. They are affectionate, lively, energetic, and make great family dogs. The origin and history of Jack-A-Poos are unknown, but they result from the worldwide trend of the 1980s to create Poodle mixes. People favored Poodle mixes because of their intelligent traits and hypoallergenic fur. Jack-A-Poo mix is believed to have originated in the USA.

The parent breed Poodle is the national dog of France and has its origin in France and Germany. The  name “Poodle” was derived from the German word “Pudel,” meaning “splash in the water.” Poodles have a natural tendency to love water and hence the name. The French term “Caniche” means “duck dog,” as the Poodle dogs were used for duck hunting. The name helped to identify the Poodles back in the Middle Ages. So, French or German, Poodles were named perfectly to fit their natural characteristics. The Jack Russell Terrier was developed in England around the 1800s to hunt foxes. They are lively, intelligent, clever, charming, and affectionate. A famous quote goes, “What a beautiful world it would be if people had hearts like Jack Russells.” Jack-A-Poo is an intelligent, loyal and loving puppy and a combination of two wonderful dog breeds that prints its happy paws in your home.

Jack-A-Poo is a small to medium-sized crossbreed dog that grows around 10-16 inches and weighs about 13-25 inches. The appearance and size of Jack-A-Poo puppies depend on which parent they inherit. However, there are certain general features they inherit. They have a slightly muscular body with a medium-sized muzzle. The ears hang around the sides of their faces. The eyes are oval or almond-shaped and are dark. The coat is short to medium in length and can be curly or coarse depending upon the Poodle or Jack Russell parent they inherit. They are hypoallergenic and shed low. The coat colors include black, tan, white, brown, golden, chocolate, gray, and sometimes a combination of all. Jack-A-Poo puppies are cute and bear-faced with a sweet, flurry look.

Jack-A-Poo is an energetic, loyal, loving, and affectionate family dog. They are intelligent yet stubborn. They are kid-friendly and can get along with other dogs and animals in the household. They are vocal and bark a lot. Their bark can alert you about strangers or a threat that lurks nearby. Being stubborn-natured, they require socialization at an early stage. They are sensitive and become anxious when left alone for a long time. Jack-A-Poo Dog is one bundle of energy and, if not attended properly, tends to boredom and destructive behavior.

Jack-A-Poos are stubborn and require patience and consistency in training. Early socialization helps in behavioral corrections and to get along with strangers, kids, and other animals. They respond to positive reinforcement, and treats and praises do wonder. They have a high prey drive and should be safe in a fenced area. Agility training helps in proper mental stimulation.

Jack-A-Poos need sixty minutes of daily exercise. They are playful and excel at flyball games. They also enjoy activities like swimming, agility games, and hiking. This helps in proper mental stimulation and to burn energy. Unfortunately, they are prone to obesity, demanding an active lifestyle and regular exercise for a healthy and happy life.

Jack-A-Poos are low-maintenance dogs and shed less than the average dog. They can be brushed and bathed once a week. However, daily brushing helps to keep the fur from knots and tangles. Ears should be cleaned and regularly checked as they are prone to ear problems. Brush their teeth daily to prevent plaque and other dental problems. Also, clean their eyes and trim their nails as a part of everyday grooming needs.

Jack-A-Poos are healthy dogs and may not develop any health concerns. But it always helps to know when to take your pup to the vet.

Epilepsy: Idiopathic epilepsy is a common hereditary disorder. It frequently causes seizures, ranging from mild to severe. Unusual behaviors may indicate a stroke or frantically fleeing as threatened, stumbling, or hiding.

Seizures frighten, but dogs with idiopathic epilepsy have a relatively good long-term outlook. Other than unexplained epilepsy, seizures can be induced by metabolic disorders, respiratory illnesses of the brain, malignancies, toxin poisoning, and severe traumatic injury.

Bloat: A common issue in large breed dogs and occurs when the stomach is filled with gas and thus bloats.

Eye Diseases: They can be prone to the following eye diseases and disorders:

Addison’s Disease: This highly severe disease, also known as hypoadrenocorticism, is caused by the adrenal gland’s inadequate synthesis of adrenal hormones. Most dogs with Addison’s illness vomit, have a low appetite, and are sluggish. Because these symptoms are nonspecific and can be confused for other diseases, it’s easy to overlook this condition as a diagnosis until it’s too late. More severe symptoms appear when a dog is agitated or when potassium level increases to the point where they interfere with cardiac function, resulting in severe shock and death. If Addison’s disease is suspected, your veterinarian may run a battery of tests to make a diagnosis.

Von Willebrand’s Disease: This genetic blood disorder impairs the blood’s ability to clot. The primary symptom is excessive bleeding after surgery. Nosebleeds, bleeding jaws, and intestinal or bowel bleeding are some of the signs and consequences. There is still no cure, and the only option is a transfusion from healthy canines. New treatments, including medicine, are being investigated. Most dogs with Von Willebrand’s syndrome can lead everyday lives. You must take your dog to the vet for diagnosis.

Patellar Luxation: It is also known as “slipped stifles,” a common problem in small dog breeds that is caused when the patella, which has three parts-the femora (thigh bone), patella (knee cap), and tibia (calf) — is not correctly bounded. This leads to lameness in the leg or an abnormal gait, like a hop or a skip. This condition is caused by birth, although the actual misalignment or luxation does not always occur much later. In addition, the rubbing caused by patellar luxation leads to arthritis. There are four patellar luxation grades, ranging from phase I, an occasional luxation causing unstable lameness in the joint, to grade IV, where the turning of the tibia is heavy, and you cannot realign the patella manually. This gives your dog a bow-legged appearance. Uphill grades of patellar luxation may require surgery.

Skin Problems: The continual scratching or licking of paws can be annoying, but don’t blame your dog for his bad behavior; the skin issue is to be blamed. Parasites, allergies, and underlying sickness are all possible reasons. The following are the symptoms of skin problems:

Jack-A-Poo requires high-quality nutritional food formulated for small-medium-sized dogs. Puppies need 3-4 meals per day, while adult dogs need to be fed twice daily. Jack-A-Poo dogs can be given dry food, wet food, or a combination of both. Never hesitate to consult a vet to meet your doodle’s dietary requirements to keep them happy and healthy.

Jack-A-Poos are playful, cheeky, and adaptable dogs. They can live in an apartment with urban settings and play and romp around in a big country yard. They love to be with caring families and require regular exercise to keep them happy and healthy. Jack-A-Poos develop strong bonds with their owners and suffer from separation anxiety when left alone. They are tolerant of cold and hot temperatures and can adapt to any environment.

Adding a Jack-A-Poo to Your Family

It is best to get a Jack-A-Poo from a reputable breeder to prevent unavoidable circumstances like health disorders and provide you with vaccination certificates. It is best to check with the puppy’s parents to ensure his health and happiness.

The cost of a Jack-A-Poo Puppy 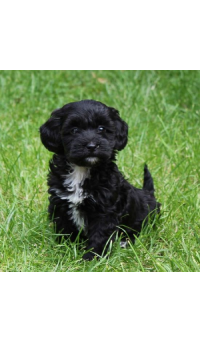 Jackapoo puppy sees himself in the mirror for the first time