Isabella French Bulldog, also known as Isabella Frenchie, is a liver or grayish-blue colored breed resulting from diluting the liver, red, or black color genes. This is the rarest color variation of the French Bulldog, and dilution of the recessive gene is the main reason for this stunning isabella-blue color. Unfortunately, the AKC, Kennel Club, and other central breed registries do not recognize Isabella as the French Bulldog’s standard coat color. However, their flat faces, happy expressions, and bat ears melt anyone’s heart with their incredible looks and huge personality.

Isabella Frenchies are lilac tinted, with noses that can differ from pink to pale brown and pale eyes of blue or brown. This is because they come from breeding chocolate Frenchies with recessive genes. After birth, the pups resemble the Frenchie having a bluish-grey body. During maturation, Isabella Frenchies gradually turns lighter, with the lilac shade getting more evident. In addition, they have large round light-colored eyes, bat-like ears, smushed wrinkled faces, and stumpy tails. The coat colors can have different hues ranging from blue to silver and have white markings on their faces and chest. Isabella Frenchies are highly adaptable puppies and don’t need much exercise, making them best suited for apartment life. The Isabella French Bulldog can easily get along well with kids, other pets, and people, making them companionable.

The Isabella French Bulldog is a loyal, friendly, playful, eager-to-please dog that loves interacting with people. Sometimes they can be a little stubborn but are effortless to train. Their loving nature and gentle demeanor make them excellent lap dogs who will cheerfully curl up and lie around with you daily. Their compatibility with kids, pets, and other animals is high.

Isabella Frenchies may exhibit stubborn traits that an experienced trainer can rectify with proper and consistent training. Also, brain stimulation is just as crucial as body training, so these breeds should not be left alone for long periods. They might get restless and scared, which results in chewing off shoes, couches, or excessive barking.

Training your Isabella Frenchie might be challenging due to their stubborn trait. So, you should be solid, patient, and consistent enough during training. However, they respond well to instructions, positive reinforcement, and commands. Being a sensitive breed, you must avoid harsh treatment, punishments, and yelling by making them more determined. Here are some of the training exercises that you need to do with your Isabella Frenchie:

Isabella Frenchies are small dogs who require a minimum exercise of 15 minutes of walking daily to keep them away from obesity. They are not suitable for exercising hard or playing outside for a longer duration under the sun. Hence, they are best suited for apartment living. Also, they should be kept in a calm environment as they are predisposed to heat sensitivities. However, Isabella Frenchies need a short daily walk to keep them healthy and hearty. They are not aggressive; thus, agility training or obedience is inappropriate. Long or hard exercise sessions can result in breathlessness because of their short snouts. Also, they should not be allowed to swim because of their short legs.

Isabella Frenchies has a thin and sensitive coat, requiring less maintenance. Gloves are better as they have soft silicone pins that don’t irritate their skin and help you reach all their body spots. However, the area between Isabella Frenchie’s wrinkles is susceptible and requires frequent cleaning. Also, since they have pale pink skin around their eyes and toes, you should pay extra attention to their care necessities. Isabella French Bulldog is not a hypoallergenic breed, and their grooming needs are as follows:

Isabella Frenchies are relatively healthy breeds. However, like any other breeds, they are predisposed to health disorders stemming from their lineage. Hence, to keep them healthy, it is essential to take them to the vet for regular health check-ups and ensure that they are updated with vaccinations.

Hip Dysplasia: A life-threatening genetically inherited condition caused by a defect in the joints of the hip bones. Fractures can also lead to this disorder, and this condition can be painful. Some therapies cure this, but the canine might get lameness or arthritis if the condition worsens.

Brachycephalic Syndrome: In the case of this condition, the dog’s nostrils will be narrowed to the extent that they will obstruct the nasal airways. This would generate difficulty in breathing to the extent of total obstruction in breathing.

Patellar Luxation: This disorder is the slipping of the knee cap from the position in their legs. Some obvious indications include the dog kicking to set the kneecap back in its place while walking or running. Vets can cure this condition if the symptoms are mild or only one leg is affected.

Cherry Eye: The gland below the eyelid will swell, looking like a cherry. This condition might need surgery to eliminate the infected gland.

Intervertebral disc disease (IVDD): French Bulldogs are prone to this disorder. One or more jelly-like discs between a dog’s vertebrae rupture or slip. This is caused because the lengthy body sometimes fails to support the spine.

Hypothyroidism: This disorder results from a disruption in the thyroid gland, causing obesity, hair loss, epilepsy, lethargy, dark skin patches, and other diseases. Signs include:

Elbow Dysplasia: Joint laxity is produced by the three bones which make up a canine’s elbow developing at different rates. Severe lameness can arise as a result of this. To cure the disorder, your vet may recommend pain medication or surgery.

Hemivertebrae: A condition that affects the vertebrae in a canine’s spine, causing pain, weakness, and paralysis in affected dogs.

An Isabella French Bulldog will require 800 calories of a high-quality diet rich in protein and other essential nutrients daily (2 cups of food). Avoid giving one large meal daily and having them swallow it down as they are prone to stomach torsion and bloating. Instead, make sure they have access to clean, fresh water.

Isabella French Bulldog is a brachycephalic dog with a humorous demeanor and lovely appearance. Ensure that you are providing them with the following living requirements:

Adding an Isabella French Bulldog to Your Family

Adding Isabella French Bulldogs to your family will need proper research about their breeders, parent breed, cost, health, and certificates. Reputed breeders are preferred since they guarantee the puppies’ and their parents’ health and happiness.

The cost of an Isabella French Bulldog puppy can range from approximately $9000 to $11,000. 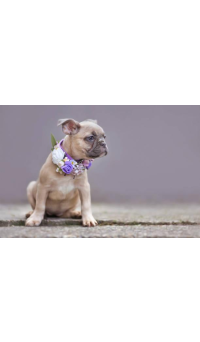