The Great Pyrenees Chow Chow Mix is a mixed breed dog created by crossing Great Pyrenees and Chow Chow dogs. If the pup takes after the Pyrenees breed, he will be a larger dog with longer fur who could be rather friendly.

Before proceeding to buy one, let’s garner more information about this mixed breed. 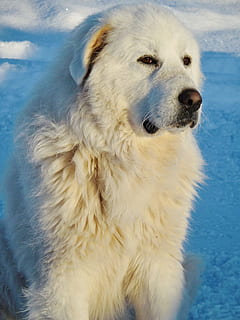 Great Pyrenees Chow Mix is a powerful and strong breed that might be best for an experienced dog owner. They have a dominant nature and require an experienced owner who can establish themselves as pack leaders. Chownees breeds do not bite, but when strangers enter their space, they may turn aggressive. Hence, she is not suggested for families with kids. However, if  adequately exposed and socialized, they get along with people and other animals quickly.  Your Chownees is likely to inherit a different color tongue from her Chow parents. This hybrid is bigger than a Chow but smaller than a purebred Great Pyrenees.

Great Pyrenees Chow Mix can have some independence or alone time when the house is noisy or crowded. They, like other canines, respond strongly to positive reinforcements. They are highly affectionate and like spending as much time as possible with you. Please do not leave them alone for long periods because they will not be able to cope. They want to be a part of the group.

Great Pyrenees Chow Mix is a clever dog who will be a little difficult to train. They will want to be the boss. They will need someone with a firm, strong hand to tell them where they belong. To keep their attention span higher, you should break the sessions up into smaller daily sessions. They may have a predation drive and be prone to hunting and chasing small animals. However, they can be controlled if treated appropriately. Positive reinforcement works. As a result, make sure to compliment her when she succeeds. They are intelligent dogs that love physical challenges and enjoy being pampered. It is easy to train Chownees if they get more exercise. Make sure you socialize them at an early stage for better results in training. Take them to the park and dog daycare as often as possible to expose them to as many people and pets as possible.

Great Pyrenees Chow’s energy levels might need to be controlled. Plan to take them on long walks and treks. This activity will keep them from causing harm. A happy dog is a tired dog. However, the tired dog is a well-behaved dog. Never tie your dog outside – it’s cruel and unkind to her.

Both the parent dogs of Great Pyrenees Chow have longer hair substantially. So prepare to brush them a few times every week. In any case, if you want to keep your floors clean, you’ll need to invest in an excellent vacuum. Bathe them as needed, but not so much as their skin becomes dry.

Some breeds are more susceptible to some ailments than others. Getting a mixed breed allows reducing that risk to a considerable extent.  However, a mixed breed is prone to specific disorders and inherits a few genetic diseases from their parents.

The Chow mixed with the Great Pyrenees might be prone to the following diseases:

Eye problems: Great Pyrenees Chow mix can be prone to these Eye diseases:

Cancer: In dogs over the age of ten, cancer is the primary cause of mortality. However, if found early enough, one can cure half of all the malignancies in one’s pet.

Skin Problems: The continual scratching or licking of your Great Pyrenees Chow Mix can be as annoying as nails on a chalkboard. But don’t blame your dog for his bad behavior; the skin issue brings a difference in his behavior. Parasites, allergies, and underlying sickness are all possible reasons. The following are the symptoms of skin problems in Dogs:

Bloat: Bloat, also known as gastric torsion and gastric dilation volvulus syndrome, is a potentially fatal condition that occurs when a dog’s stomach fills with gas and twists.

Patellar Luxation:  Knee Dysplasia, also known as Patellar Luxation, is a condition that affects both the parent breeds. The dislocation of the knee cap can be excruciatingly painful, causing the dog to avoid leaning on the injured leg.

Hip Dysplasia: Hip dysplasia is a painful, life-threatening condition caused when the bones of the rear legs don’t fit properly in the joints. Hip dysplasia is primarily hereditary, but injuries, excessive weight gain, wrong exercises can cause hip dysplasia. Some dogs might exhibit symptoms, while some might not. Treatment ranges from medication to replacement of the hip through surgeries. To avoid this problem, do not crossbreed with a parent who has the issue of hip dysplasia. Regular checkups are suggested.

Swollen Hock Syndrome: The dog’s ankles (or “hocks”) get swelled during these instances. The dog’s “socks” (a huge skin fold around the ankle) are typical; however, the swelling during a fever is different and only lasts for the duration of the fever. The muzzle may also swell and become uncomfortable, and there may be nausea or diarrhea as well.

Diet is frequently done on a per-dog basis. Each one is distinct and requires a particular diet. In the United States, a lot of dogs are overweight. Fish oil, glucosamine, and chondroitin supplements should be started as soon as possible in a mix like this one that is prone to hip and elbow dysplasia. A raw food diet is also a good option.

Overfeeding any dog is a bad idea since it can exacerbate health issues like elbow and hip dysplasia.

Both the parents of the Great Pyrenees Chow mix are not really made for apartment living. Hence, Great Pyrenees are also not at all suitable for living in apartments. Even if they live in apartments, ensure that they have a lot of space during outdoor activities.

When two pure breeds, such as Great Pyrenees and Chow Chow, are crossed, the offspring might be facing terrifying consequences. Furthermore, crossbreeding has the potential to pass on the parents’ health issues to the puppies. To avoid getting a weak hybrid pet when crossing a Great Pyrenees with a Chow Chow, check their parent’s lineage and health records from a trustworthy breeder.

Adding a Great Pyrenees Chow Mix to Your Family

A Great Pyrenees Chow mix can be welcomed to your abode by adopting it from here:

Great Pyrenees Chow Mix puppies are pretty expensive. They can cost you somewhere between $2000 to $4000. Check the health clearances of the puppy’s parents before purchasing. It is also a good idea to go to the breeder’s place to see the puppy’s parents in person and get an idea of how your dog will appear in the future.