The Golden Retriever Husky Mix, otherwise called Goberian, combines two athletic, affable breeds, the Golden Retriever and Siberian Husky. Intelligent, friendly, and energetic, these puppies inherited some of the best traits from both their parents. They are renowned as excellent family dogs, have a good temperament, social personality, and prefer to be around people. However, Goberian requires adequate exercise to ward off any antisocial manners. This breed loves jogging, hiking, and taking extended trips to the canine park. Hence, they are not suitable for apartment living.

Like other mixed dog breeds, the resulting traits and appearance of Goberians may be unpredictable due to the parent breeds. Still, there is a degree of assurance in the potential outcomes when looking at the purebred parents’ features and traits. Goberians have a reputation for being intelligent, but if your puppy inherits more Husky traits than Retriever, you will be dealing with a more independent and stubborn one than anticipated. But positive reinforcement and patience work wonders on this breed.

Golden Retrievers are well-formed, robust, active dogs, well put together, not extended or clumsy in the leg, displaying a generous expression, and maintaining an enthusiastic, brisk, and self-confident personality. They have a long snout, floppy and down-turned ears with a thick double coat that adds to the bulky appearance of this breed. Overall gait, balance, build, and purpose are given more importance than any of their parts. The males stand 23-24 inches in height at withers, and females stand 21 -22 inches. Length from breastbone to the buttocks is slightly more notable than the height at withers in a ratio of 12:11. The males weigh about 45-60 pounds and the females about 35-50 pounds.

On the other hand, Huskies have a double coat in various colors, such as black and white. They may also have shades of red and copper-colored markings on their body. The prominent feature is their wolf-like appearance and blue or brown almond-shaped eyes. They can weigh between 35-60 pounds and 20-23 inches in height.

The Goberian puppy will be a mixture of these features mentioned above. Females are often smaller and leaner than males. They usually have a medium-length coat with a combination of black, golden, white, blond, cream, and different shades of brown. Unlike Huskies, Goberian has a low tendency of shedding. Due to the cross-breeding, a Goberian is more tolerant to heat compared to Siberian Husky puppies.

Goberians are faithful and guarding dogs that manifest a cold and alert behavior when encountering strangers. However, they tend to be generous with both children and other pets. In addition, this breed comes from two intelligent parents, so they are bound to be very lively and smart, making them more comfortable and easier to train.  However, Goberians have a highly social nature and can inherit the Golden Retriever’s tendency to suffer from separation anxiety because of their intelligence. They are not okay when left on their own for extended periods and can exhibit detrimental behaviors that include constant chewing and barking.

A Goberian has independent thinking and a strong prey drive. This feature comes from their Husky parent. At times, they may come off as annoying and act of their volition. They may be disobedient to your instructions. When dealing with this behavior, it is essential to remember that you need patience in caring for them. They need early socialization, exercise, proper training, high-quality dog food, and regular visits to the veterinarian.

Owing to the stubborn and independent nature of the Goberian, you may find it challenging to train them. It takes time and patience to train a Goberian. You should employ obedience training and leash training to avoid possible destructive behavior that can be traced to their Husky origin. You can use a combination of various dog treats and toys to help keep their focus. Regularly use positive reinforcement, even if they are stubborn. Positive reinforcement increases the relationship you share with your dog and allows you to form a connection based on respect and trust.

Both Golden Retrievers and Huskies are high-energetic breeds. Therefore, it is natural that the Goberians will be as aggressive and spirited as their parent breeds. Hence, they require lots of agility training, exercises, and walks to burn off the energy and stay healthy. They will need at least an hour of daily exercise. These breeds are a perfect fit for those who go on a regular jog. Make sure your Goberian gets adequate training to avoid damaging behavior.

The most remarkable trait for the Goberian is their bountiful coat. However, they do not shed much, and it is considered part of the low shedders.

Apart from the aesthetic grooming purpose, there are many causes to accomplish this activity.

Here is a list of the tools and accessories you will require for grooming a Goberian:

Routine grooming is necessary for maintaining the shiny and healthy coat of your Goberian puppy. Using a slicker brush over a pin brush is recommended because of its purpose of untangling knots or mats in the fur. Also, it aids in removing loose hair and debris. In addition, a slicker brush can run through the thick layers of the double coat, stimulate the production of essential oils for moisturizing the skin, and facilitate efficient grooming. This will also boost blood circulation and improve the dog’s health. You should brush at least once a week to decrease shedding and avoid matting the fur.

The following step is bathing, especially when they are dirty or smelly. Some people continue to trim the coat of the pup before bathing. It is your preference if you will follow the tracks to the dot.

After bathing, you will have to brush the coat again following the trimming process. You should avoid trimming the entire fur because the double-thick coat of Goberian acts as insulation against varying weather. Typically, groomers use clippers in this method. However, you can use thinning shears for trimming portions of the coat.

Another part of the grooming process is checking for wax accumulation in the ears and indications of an ear infection. Next, you can wipe their ears with a dog-specific ear solution and a cotton ball. Trim their nails regularly. Finally, clean their teeth at least once a week to avoid tartar formation and plaque.

Generally, Goberians are considered healthy dogs. Still, they can undergo issues and diseases inherited from their parent breeds.

Cancer: In canines over the age of ten, cancer is the prime cause of mortality. However, if diagnosed early, one can rectify half of all the malignancies in one’s dog.

Hip Dysplasia: Hip Dysplasia is a prevalent disease among active dogs because the hip and joint can deteriorate over time. Being energetic canines, their socket joint on the hips separates, producing friction in the socket. This situation can result in paralysis if left untreated.

Epilepsy:  This is an inherited disease for which the reason is unknown. Canines may undergo seizures one or the other time but look perfectly normal in between the events.

Cataract: This disorder happens when the eyes’ lens starts to have a clouding formation, affecting eyesight. If left untreated, this difficulty may lead to permanent blindness.

Bloat: GDV or bloat is a life-threatening ailment that is common in deep-chested dogs. When bloat happens, your dog’s gut becomes inflated with twists and gas. The confined gas hinders your Goberian’s capacity to vomit or belch.

Von Willebrand’s Disease: This is a prevalent inherited blood disorder that contrasts with its clot ability. The main sign is excessive bleeding after surgery or injury. Other symptoms include bleeding in the gums, nose, stomach, or intestines.

Eye problems: Goberians are prone to these eye conditions:

Osteochondritis dissecans: The inflammatory disease (OCD or OD) occurs when the infected cartilage divides from the underlying bone. It usually affects the shoulder joint, but it can also hit the hip, elbow, or knee.

Flea Allergies: Goberians inherit this allergy from the Golden Retrievers. One of the most common allergens, flea allergies in your pets, can be reduced with the help of regular health check-ups and flea preventative treatments.

Hypothyroidism: A disease in the thyroid gland that is considered to cause hair loss, epilepsy, obesity, lethargy, dark skin patches, and other skin ailments. You can treat this sickness with a proper diet and medication.

Cryptorchidism: Cryptorchidism is one of the most prevalent congenital development defects in dogs. 14% of male Huskies are affected, according to the Siberian Husky Club of America (SHCA). Cryptorchidism affects one or both testicles. This leads to cancerous growth or spermatic cord torsion in the affected testicle or testicles.

Cryptorchidism can be very painful for the afflicted male and may have adverse effects on fertility. Therefore, the SHCA suggests against breeding the affected males.

The following factors determine the quantity of food you will provide to your Goberian puppy:

The kind of food advised for Goberian is dry food. Dry food aids keep the strength and cleanliness of your dog’s gums and teeth. Generally, medium to large dogs is given three to four cups daily, divided into two meals. You should avoid providing high-carb meals to your puppy and add a more protein-containing diet, at least 25% of the meal, like fish, beef, chicken, and others.

Goberian is an active dog breed that urges to expend energy, making it unsuitable for apartment life. However, these breeds are exceptional guard dogs who offer valuable service to their pet parents, being gentle and loving. These dogs are also kid-friendly but quite suspicious of strangers. Goberians inherit the escape artists trait from their Husky parents. So, closely watch them, for they can jump off or dig out your fence.

It is vital for owners to ask breeders for the parents’ documents or even meet them in person before getting the pup. Reputable and reliable breeders will not delay giving evidence that they will be taking home a healthy puppy. It is also essential to visit the doghouse to see how the breeder breeds their canines.

On average, a Goberian puppy may cost around $250 to $1500, not including miscellaneous costs.

Adding a Golden Retriever Husky Mix to Your Family

To get a Golden Retriever Husky Mix online: 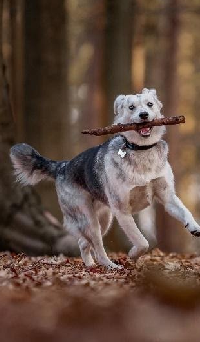