A Golden Retriever Pit Bull’s personality depends on an individual dog’s gene expression. He may either exactly resemble one of his parents or maybe a perfect hybrid of both. Therefore, his personality is entirely unpredictable. However, these dogs have a well-built stature that may be lean or muscular.  In addition, they may have brown or blue-colored eyes with floppy ears.

Due to their large and athletic stature, the Golden Retriever Pit Bull dogs are confident and energetic. They are well-mannered, fun-loving, loyal, and friendly. These dogs are very affectionate to their pet parents as they consider each family member as its pack. These dogs are prone to separation anxiety; they shouldn’t be left alone as they may develop destructive behaviors such as digging, chewing, and barking. Additionally, they are incredible nanny dogs who are gentle and highly protective of kids. However, they are wary of strangers and need time to warm up with them.

Being quick learners and having a pleasing demeanor, Retriever Pits are easily trainable. This trait keeps them from getting aggressive. Also, they make excellent watchdogs and therapy dogs owing to their parent genes. As highly active breeds, they enjoy exercises and physical activities. With an innate protective instinct, they prove to be excellent watchdogs with a high prey drive. For this reason, they shouldn’t be left alone with other smaller pet animals.

Although Golden Retriever pit bulls are easily trainable, they need a dominant trainer to assert the firm alpha position. This trait prevents your dog from becoming stubborn. Their training must begin early from puppyhood and can be kept short and positive. Additionally, these dogs must be crate trained. For this purpose, start associating your dog with the crate the moment he comes home. The crate has to be linked with positive experiences such as treat time, mealtime, and relaxation.

The Golden Retriever Pit Bulls are highly energetic dogs that require an hour of exercise per day in addition to their daily play-time. Inheriting the traits of a working dog, these dogs need to be mentally and physically stimulated. Physically, they can be engaged with long, intense walks in addition to mentally stimulating activities like a treasure hunt with treats, scheduling an obedience session, or a puzzle toy.

Other grooming requirements include trimming their nails, cleaning their eyes and ears to avoid infections. In addition, brush their teeth regularly to get rid of gum diseases and periodontal diseases.

This condition causes defect or injury to the hip bones, joints and worsens without treatment.

Elbow dysplasia occurs when the bones of the elbow joint don’t align properly. This malalignment causes abnormal pressure at the joint, leading to chronic rubbing, resulting in severe osteoarthritis.

Although the symptoms begin to show as early as four months of age, some dogs will not show these signs until later in life. Further, the disorder may also injure both the elbows, but one of them may be heavily affected.

Bloat or GDV is a life-threatening condition that is prevalent in deep-chested dogs. When bloat occurs, your pet’s gut becomes distended with gas and twists. The trapped gas hampers your canine’s ability to belch or vomit. This inability blocks the average blood flow back to the heart, causing a drop in blood pressure leading to shock. If untreated, this shock could eventually lead to death.

This condition is caused due to the thickening of the eye lens, which leads to cloudy vision. Although it occurs primarily because of their age, you can treat this condition either with medications or surgery.

Pit Bulls are prone to cardiovascular diseases, which may be congenital or inherited. Some of the most prevalent cardiac diseases in Pit Bulls include:

Some more symptoms that occur rarely include:

Your veterinarian may recommend that you count the number of breaths your dog takes per minute when your dog is resting at home. This can be an effective way for you to monitor the development or progression of congestive heart failure in dogs with heart disease.

The Retriever Pit is an agile and large dog that requires a high-quality meal with a rich protein content that constitutes about 18% of its diet. An adult Retriever Pit requires 1600 calories per day that can be divided and served as two meals. Raw pork or poultry should replace a cup of your dog’s formula. On the contrary, a puppy should eat four balanced meals per day. However, the right combination of exercise and a proper diet can prevent obesity.

The Golden Retriever Pit Bull has an urge to expend its energy, making them unsuitable for apartment life. Being loving and gentle, these dogs are excellent service dogs who offer valuable service to their pet parents. These canines are also kid-friendly but quite wary of strangers. Dogs with short coats tolerate a warm climate, whereas those with a long coat tolerate colder weather.

Things to Remember Before Buying a Golden Retriever Pit Bull

The Golden retriever Pit Bull is pretty rare to find; hence they can be expensive. Additionally, these dogs grow up to be very big, and they also require a physically active pet owner.

A Golden Retriever Pit Bull Puppy costs up to $2,500. Ensure to meet the puppy’s parents and check for health certifications and registrations for the parents before buying.

Adding a Golden Retriever Pit Bull to Your Family 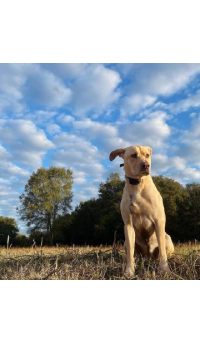