The German Shepherd Dachshund mix, also known as Dachshund Guard is a crossbreed of two pure German breeds: German Shepherd and Dachshund, markedly distinct in appearance and personality. It appears to work wonderfully, as it completely matches the parents’ features.

The Dachshund is a great lap dog smaller in size, while the German Shepherd is an outdoorsy, medium to large size dog. The former is known for its short, smooth coat, while comparatively, the latter is known for its long, thick fur. Their personalities and physiques are likewise diametrically opposed. 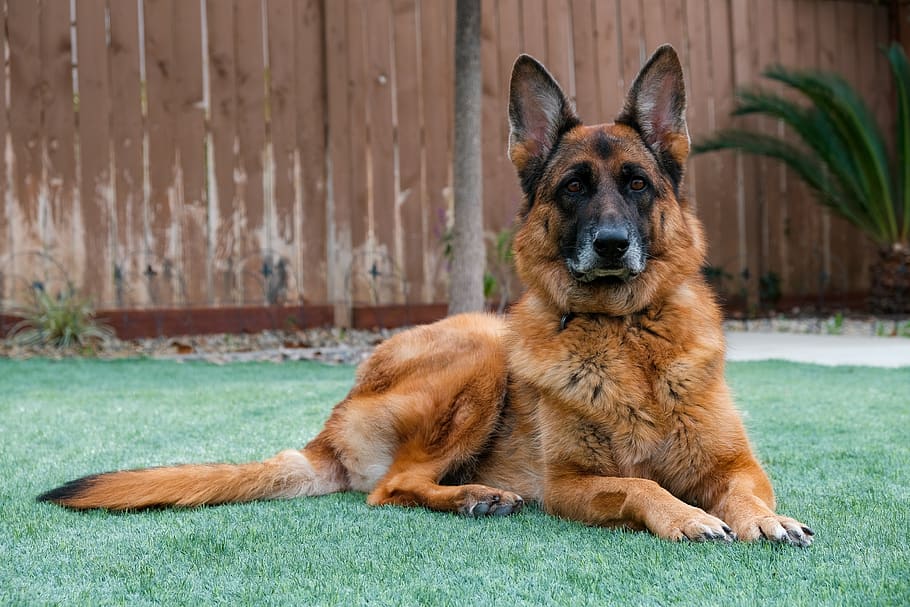 German Shepherd vs. Dachshund: A Comparison

German Shepherd Dachshund mix will vary quite wildly in appearance. They weigh anywhere between 16 and 90 pounds and measure between 8 and 26 inches in height. Their size will also depend on whether their Dachshund parent is the miniature or standard size.

German Shepherd Dachshund mix dogs are likely to be loyal to their masters and adore them. While their friendliness will extend to the rest of the family, they will have a special affection for the person they perceive to be their primary caregiver. They are also stubborn at times. Unfortunately, with this comes the potential for them to become overprotective. They may snap to prevent people from approaching their master. They make for excellent guard and watch dogs.

German Shepherd Dachshund Mix will most likely be social but may be wary of strangers at first. However, they will warm up to them over time, with their Dachshund personality.

The mixed-breed will need endless activities and can keep you occupied for hours. They have a lot of pent-up energy that needs to be unleashed, or they will become destructive and destroy everything in their way. So, make sure to give them their suggested exercise and spend as much time with them as possible because they don’t like to be left alone for extended periods.

Due to German Shepherd parents’ trainability, the Dachshund Shepherds are quite easy to train. However, they may have an ‘off-day’ where they would prefer to be sprawled across the sofa doing nothing, no matter how much you persuade them to participate in a training session. With plenty of verbal praise, treats, and positive reward-based training, Dachshund Shepherds will be encouraged. It is to be remembered that, as Dachshund Shepherd is a large and powerful dog, obedience training is essential to maintain control.

Regardless of which parent they resemble the most, you should start their training sessions as soon as you welcome them home. Discourage any overprotective tendencies they may exhibit towards you. Socialize them with as many humans and other animals as possible from a young age. So, that they don’t feel the need to guard their families. Dachshund Shepherds also inherit a lot of prey drive. So, don’t let them off the leash in public, since you might not see them again.

German Shepherd Dachshund mix will require 30 to 60 minutes of exercise per day, depending on his size and energy levels. Also, he needs at least two walks of moderate distance every day. If the crossbreed takes after his German Shepherd parent, then he would require even more distance to be covered. You will be able to tell when he has had enough walks, as he will stop in his tracks and expect you to carry him.

Due to Dachshund Shepherd’s intelligence and interest, they need to be mentally stimulated throughout the day. So, anticipate playing a lot of interactive games with them, no matter how much you exercise them.

When exercising this breed, especially if they have inherited the Dachshund’s short legs and long back, extreme caution is advised. When the legs and back joints are overworked, they are vulnerable to catastrophic injury. Exercise that is too strenuous should be avoided. Stopping your German Shepherd Dachshund mix from running up and down the stairs and jumping on and off the furniture is also a smart idea.

The high levels of shedding of German Shepherd Dachshunds is well-known. When it comes to grooming and cleaning, it’s something you should consider.

Long coats with straight or wiry fur are common in these dogs. They may take after the Dachshund’s single-layer coat or the shepherd’s double-layer coat. Wire-haired German Shepherd Dachshunds are particularly prone to inheriting the latter.

Regardless of his coat type, he will need to be brushed almost daily during the shedding season because he has a double coat.

The German Shepherd Dachshund is a healthy dog that will live for 7 to 14 years, or possibly a little longer if he is linked to the world’s oldest Dachshunds. The following are the most common health risks that your mixed dog may face:

Bloat: Bloat or Gastric Dilatation and Volvulus Syndrome, is common in German Shepherds, but it can also affect Dachshunds. The stomach dilates, spins, and twists, which is a serious disorder of the digestive system. It can cause a lot of pain and suffering, damage the blood vessels and interrupt blood flow to major organs. Also, it causes serious repercussions such as organ failure.

Degenerative Myelopathy: Degenerative myelopathy is a chronic illness that causes paralysis over time. It starts in the hind limbs, but it can spread to the front legs as well.

Elbow and Hip Dysplasia: This is caused by an improper development of the hip and elbow joints, which leads to grinding of the bones and cartilage, eventually causing painful arthritis and mobility concerns in the German Shepherd parent.

The most prevalent condition in German Shepherds is hip dysplasia. It may be passed down to their offspring if they have a similar body type. The shorter rear legs and lower hips compared to the front section of the body create grinding in the hip joints, which can lead to hip dislocation.

Patellar Luxation: Knee Dysplasia, also known as Patellar Luxation, is a condition that affects both parent breeds. The dislocation of the knee cap can be excruciatingly painful, causing the dog to avoid leaning on the injured leg.

Intervertebral Disc Disease (IVDD): Spinal degeneration affects all Dachshund mixes. If they acquire their Dachshund parent’s short legs and extended body, they are likely to experience a disc eruption at some point. Intervertebral Disc Disease is caused by the lengthy body not providing enough support to the spine. If the problem worsens, it might result in pain and perhaps paralysis.

Mitral Valve Disease: In this condition, the weakening of their heart valves causes blood to flow back into the atrium, which can lead to cardiac failure. This is more common in Dachshunds. Veterinarians can detect it early, so it’s crucial to keep up with their regular examinations.

Thyroid disease: This includes autoimmune thyroiditis and hypothyroidism, for example. They interfere with thyroid hormone production, resulting in excess or insufficiency. This can lead to ramifications in a variety of physiological systems.

Cancer: German Shepherds have one of the highest rates of cancer development of any breed. Hemangiosarcoma and Osteosarcoma are cancers of the circulatory and skeletal systems, respectively. As a result, their mixed breeds are at risk as well, necessitating regular vet visits.

Eye Problems: Both German Shepherds and Dachshunds are susceptible to a number of eye diseases, including Progressive Retinal Atrophy and Cataracts. As a result, it’s likely that their descendants will inherit it as well.

Ear Infections: This is most common in German shepherd Dachshunds with floppy ears. Fungi and bacteria can cause ear infections to thrive in the warmth and darkness provided.

The German Dachshund Shepherds will take anywhere from 1 1/2 to 2 1/2 cups of food every day, depending on their weight and energy levels. It is recommended that you follow the diet requirements or consult your veterinarian for personalized guidance. They would do well on a high-quality kibble that provides enough protein, fiber, vitamins, and minerals to meet their nutritional requirements. As they are more likely to suffer from joint, spine, and hip problems. They should eat a diet rich in fish oil and supplement with chondroitin and glucosamine.

Given their potential mobility and spinal health concerns, you must keep your German Dachshund Shepherd at a healthy weight. Obesity is a prime concern as it can worsen joint and spinal problems, deteriorating their health much faster than at an average weight. While your dog may appreciate the additional treats, his body may not; so, be careful not to overdo it.

German Shepherd Dachshund’s living troubles are entirely dependent on their parents’ size. This is because,  if it is a small dog, it may easily adapt to life at home, as long as its exercise requirements are met. On the other hand,  if it is of a larger size, it would be a better fit for the family with a backyard.

If a German Shepherd Dachshund is well socialized, he may be able to live with other household pets; still, introduce him to other pets gradually. Do it in a supervised atmosphere because his ancestors’ hunting genes may come into play. He must be successful with youngsters, but as with any dog, you must keep an eye on him at all times.

When two pure breeds, such as German Shepherd and Dachshund are crossed, the offspring might be facing terrifying consequences. Furthermore, crossbreeding has the potential to pass on the parents’ health issues to the puppies. To avoid getting a weak hybrid pet when crossing a German Shepherd with a Dachshund, check their parent’s lineage and health records from a trustworthy breeder.

Adding a German Shepherd Dachshund to Your Family

When purchasing a German Shepherd Dachshund from a breeder, it is critical that you do all possible tests to ensure that the puppy is healthy.

Unfortunately, there are a lot of bad breeders out there who are willing to put their litters’ welfare on the line for faster sales. As a result, such breeders are dubbed “puppy farms”.

Puppies sold in such places are frequently genetically ill, have received no training or socialization, and have been raised in pathetic conditions. They are likely to be unhealthy, and they may have serious behavioral issues. Hence, you should do everything possible to avoid buying puppies from such breeders.

As German Shepherd Dachshunds are a relatively new and unusual mixed pooch, it is unclear how much the puppies cost exactly, but it is anticipated that they will cost between $400 and $900. 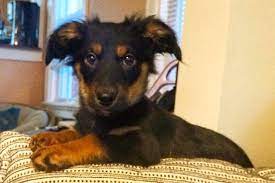 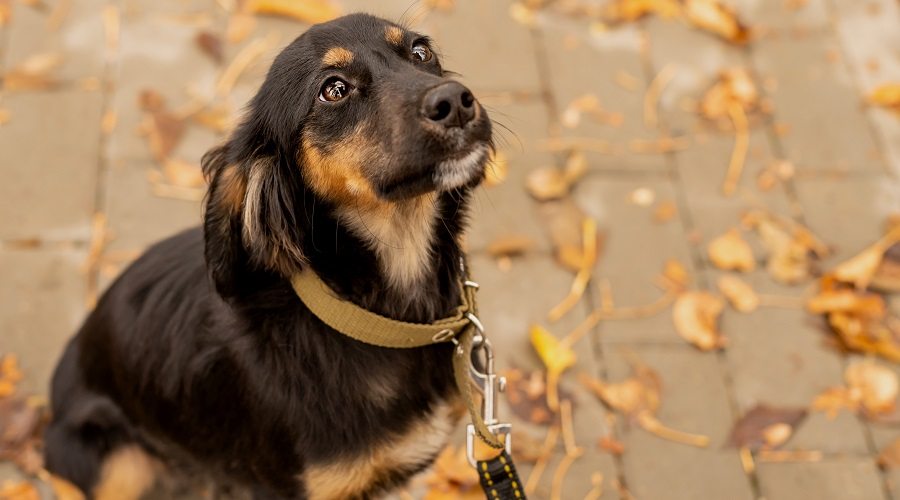 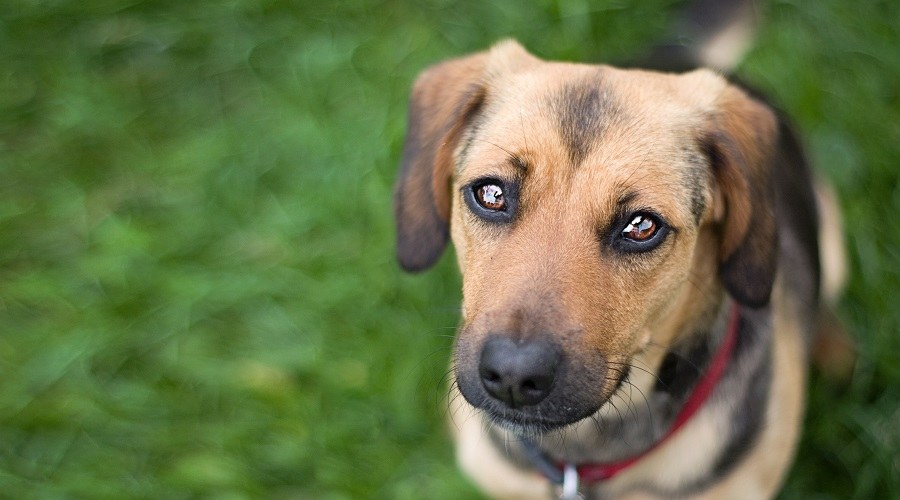 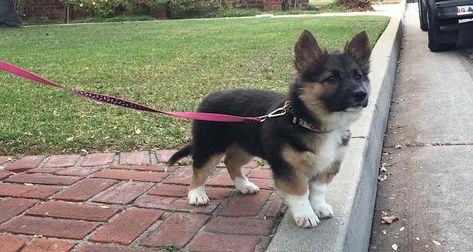 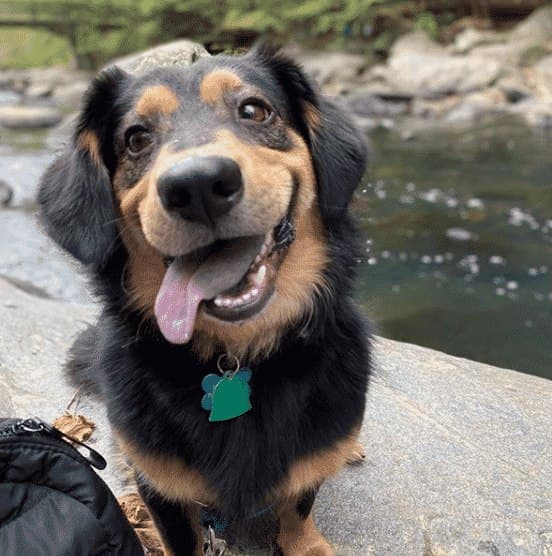 Allister is a German Shepherd Dachshund