German Shepherd Coyote Mix is a hybrid between German Shepherd and Coyote Dog. Coyote dogs are Prairie wolves, which is different from any Canidae breeds. Mixed breeds of Coyotes are often referred to as Coydogs and Dogote. A Coydog is a cross between a coyote and a domestic dog. Since these two canids are distinct species, the Coydog is regarded as a canid or interspecific hybrid. An interspecific hybrid is created when a Coyote is crossed with a German Shepherd or any other dog breed. Unless there is human involvement, these mixes do not form spontaneously. A Coydog results from a male Coyote crossing with a female dog. A Dogote, contrarily, is the progeny of a male dog and a female Coyote.

German Shepherd Coyote has no accurate history documented. However, there are sayings that they have existed for centuries now. According to one theory, the Teotihuacans were the first breeders of Coydogs. Coydogs are claimed to have been utilized for hunting by the early settlers. This is most likely not the scenario with Coyote and Shepherds mix. These mixes are less than 100 years old. This is because the German Shepherd originated in 1899.

German Shepherd Vs. Coyote: A Comparison

The Coyote Shepherd is a medium to large dog, weighing 60 to 120 pounds on average. The height of a fully grown Coydog varies as well, with the majority of these canines being between 22 and 27 inches tall.

The Coyote German Shepherds are intelligent and athletic, making them excellent walking or running companions. They are independent thinkers due to their high intellect. Like both parent types, the Coyote German Shepherd mix is prone to aggressiveness; thus, thorough training is required. They are devoted to their family and may serve as guard dogs to ensure their region’s safety. However, it is not easy to predict the temperament of this mix due to pole apart characteristics of the parent breeds.

The German Shepherd Coyote mixes are energetic and agile. Both their parent breeds are also active and agile. However, you can witness their energy and agility in different hours. The Coyote is more into nighttime activities, and the German Shepherds are accustomed to morning activities. The Coyotes can be seen patrolling hunting throughout the night, covering 30 miles each night, whereas German Shepherds are strong in herding and guarding. Due to these traits, they benefit from socialization around known people and strangers. Contrarily, Coyotes are nocturnal hunters with an exceptional sense of sight and smell. Therefore, the mix will need consistent obedience and socializing training if the puppy inherits Coyotes characteristics. The German Shepherd Coyote Mix is difficult to train, but a proper schedule taking the upper hand can make them amicable with people around and strangers!

The German Shepherd Coyotes should also be trained to get along with kids and other pets, as the mix is generally not pet and kid-friendly. Housebreaking is another crucial aspect in training the Coyote German Shepherd mix. It is best to start training them when they are 8 weeks old. A professional dog trainer is essential to train this breed due to the highly aggressive characteristics of Coyote.

German Shepherd Coyote Mix will require a 3 hour exercise time to sweat off their energy and maintain a healthy lifestyle. They need physical and mental exercises to keep them away from aggressive and unwanted behavior.

The German shepherd coyote hybrid sheds a lot. They shed twice a year. Therefore, you need to keep a vacuum cleaner handy. Daily brushing, on the other hand, will be enough to reduce shedding and keep the coat looking neat. The ears of Coyote German Shepherd hybrids will be longer than those of regular German Shepherds. You’ll need to use a light ear cleaner to assist your pet in keeping their ears clean. You may also keep their nails trimmed once a month to prevent them from scratching you or other pets. Brush their teeth regularly to avoid periodontal diseases, tartar buildup, and gum diseases. Give them a quick wash once a month to keep allergies and skin disorders at bay. You may also reduce shedding by gently scrubbing their coats once a week.

German Shepherds are susceptible to a wide range of health issues like:

Hip Dysplasia: Hip dysplasia is a condition in which the ball and socket joint of the hip are misaligned. Coyote Shepherds, like German Shepherds, are susceptible to this health problem. Hip dysplasia in Coydogs will progress if left untreated, leading to inactivity.

Elbow Dysplasia: This genetic condition affects several giant dog breeds’ front legs. Obese, over-exercised, and wounded dogs are more likely to have this condition than the rest of their litter.

Arthritis: Arthritis is the outcome of hip or elbow dysplasia. Arthritis is an inflammation of the joints that results in cartilage loss. Mobility becomes uncomfortable and stiff when the joint is utilized, and the cartilage wears away. Coydogs with dysplasia will ultimately develop arthritis. However, arthritis may appear independently.

Bloat is another health issue that coydogs inherit from their dog parents. Bloat is a common problem in big dogs. It frequently happens when a dog isn’t very active and feeds its meal quickly. Fasting can cause an overabundance of air to enter the stomach, causing it to twist on itself and impede blood supply to the organs.

Heartworms: The infectious worm Dirofilaria causes heartworm disease, a significant health problem. A mosquito bite is the most prevalent mode of transmission for this parasite. Unfortunately, there is no authorized heartworm preventative medication for Coydogs.

Mange: Sarcoptic mange is an infectious skin disease that affects dogs. It is passed from dogs to people and vice versa. Dips and topical lotions are used in the treatment of mange in Coydogs. When a Coydog is identified with mange, it will have severe itching on many portions of its body.

Autoimmune Thyroiditis:  When a dog’s immune system damages the thyroid gland, it is called autoimmune thyroiditis. This disease affects so many German Shepherds and their mixed breeds. Losing weight, vomiting, diarrhea, increased hunger, and heart murmurs are signs of this illness.

A high diet might benefit a German Shepherd-coyote mix. Coyotes aren’t fussy eaters, but they require a considerable amount of meat, as would your coydog. Choose a dog meal with meat as one of the first five components, or feed your dog a raw meat diet. Adding fish oil to your pet’s supper can help maintain their joints in good shape and their coat smooth.

Apartment living is not recommended for the coyote German Shepherd. To play and exercise, these dogs need a privacy fence with a big yard to play and exercise. These dogs are territorial and violent by nature. Their irrational inclinations might lead them astray. As a result, they are harmful in crowded locations or residences. These dogs thrive in rural settings.

Adding a German Shepherd Coyote Mix to Your Family

Getting a German Shepherd Coyote Mix puppy is not an easy task. You will need to do exhaustive research before you get one. You will need to be a capable pet owner as training a Coyote German Shepherd Mix will be challenging. Also, you must get one from a trustable and reputable breeder who will provide you with all the minute information about the puppy. As the breed is rare, there might be breeders who may scam you with other puppy breeds. Therefore, ask for vaccination certificates, gene testing certificates, health issues, diet and nutrition, puppy-specific temperament, and training. Remember to meet the parent before getting the puppy from the breeder.

Since the breed is rare, the breeders might put a Coyote German Shepherd Mix on sale within the range of $300 – $1500, depending on the breeder. 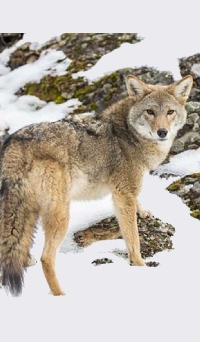 German Shepherd Coyote Mix-breed | Is this mix-breed good for you?