The shape of the ear depends on where the Furry French Bulldogs are bred. English breeders go with Rose shaped ears, and American breeders go with Bat shaped ears. Their medium-length hair is furry near the mane, chest, and ears. Due to their flat face, never expose them to hot weather conditions.

The Furry French Bulldogs are affectionate, playful, and alert. When scolded, they will be sad and mope around the house. They are prone to separation anxiety, so they should not be left alone for a long time. When they get bored, they might get some undesired behaviors. Their compatibility with kids and other pets depends on socialization.

Training a Furry French Bulldog is relatively easy. They respond well to positive reinforcements and rewards. If you motivate them properly, they will learn quickly. It is essential to keep them occupied with moderate activities indoors. Since they are prone to obesity, ensure that the quantity of food will be compromised with the quantity of treats.

The exercise needs of Furry French Bulldogs are low. Walking once or twice a day is sufficient. Long exercise sessions or hard exercises can result in breathlessness because of their short snouts. In addition, they have short legs and can drown easily. Due to this reason, they should not be allowed to swim and need supervision when they are around water.

The grooming needs of a furry French Bulldog is more as the long hair can trap dust and dirt. Bath them once a week to avoid the foul smell and fungal infections. Regular brushing using a comb will help maintain their long coat. The skin in the face will be wrinkled, which can trap moisture or food particles leading to infection. Wiping their face with peroxide and moisturizing will avoid potential skin conditions. Other grooming includes teeth brushing, cleaning their ears, and nail trimming.

Some health conditions that are common for dogs can affect Furry French Bulldogs. Today there are various tests to diagnose a disease at an early stage. Through regular health checkups, any condition can be detected early and cured in the beginning stage.

Brachycephalic Syndrome: This condition is prevalent in dogs with short muzzles. Their nostrils will be narrowed, and the airways will be blocked, ranging from difficulty in breathing to noisy or total obstruction in breathing.

Hip Dysplasia: This is a genetically inherited condition caused by a defect in the joints of the hip bones. Injuries can also lead to hip dysplasia, and this condition can be painful. There are treatments to cure this, but the dog might get arthritis or lameness if the condition worsens.

Cherry Eye: The gland under the eyelid will protrude, looking like a cherry. This condition might need surgery to remove the infected gland.

Dry Eye: Dry eye is a painful condition caused due to the insufficient production of tears by the tear glands.  The affected eye might appear dry or have a blue haze. Treatments include medication or teardrops.

Entropion: The condition in which the eyelids are inward and rub against the eye causing eye irritation is entropion. The affected dog might need surgery to correct the eyelash.

You can follow a diet plan depending on the weight, age, and health of your dog. The Furry French Bulldogs love to eat, and they won’t usually know how much to eat. They have no control over their eating habits as they won’t know when to stop eating. Overeating can make them sick, and they are prone to obesity. It is vital to provide the proper quantity of food twice a day to maintain their health and weight.

The Furry French Bulldogs can adapt well to apartment living. They can get along well with pets with proper socialization. The small snouts of Furry French Bulldogs make it risky for them to travel in air-compressed flights. As they are prone to breathing problems, it is advisable to take them on airplanes, and many airlines do not allow furry French bulldogs on their airplanes.

Adding a Furry French Bulldog to Your Family 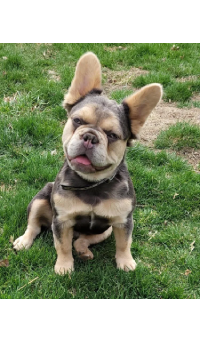