The Doberman is a German breed named after Louis Dobermann and it is called Doberman Pinscher in the United States and Canada.

The Doberman is a strong, intelligent, and protective dog of medium to large breed, weighing about 60 to 100 pounds and standing tall up to 28 inches. The protective and alert nature makes them a ferocious breed used by the police and military in search and rescue operations.

The body is sleek but solid and is covered with a glistening coat of blue, black, red, or fawn, with rust markings. At times, its fearless nature can put off strangers and intruders, but that should not undermine their friendly, trustworthy, and loyal quality. 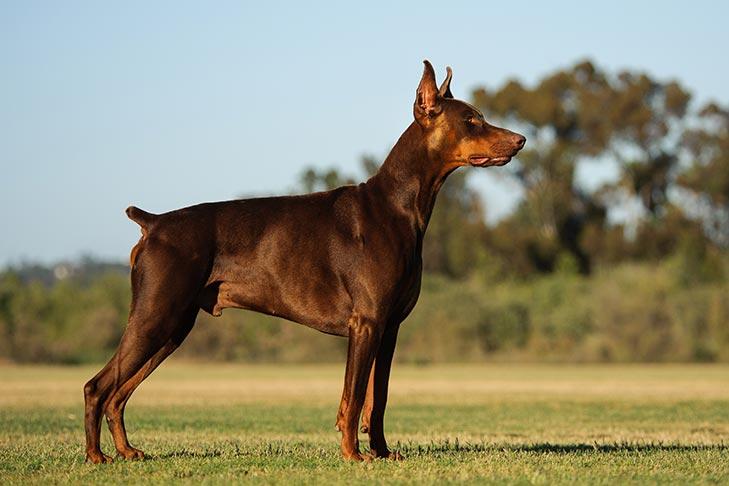 There are two types of Dobermans:

American Dobermans are shorter, lighter, and sleek. The neck is slender and extended with a smaller chest. It is more of a show dog and less brave. They prefer an indoor environment and a hot climate.

European Dobermans are taller, heavier with more muscle mass. The neck is thick and short, with a broader chest. It is a brave and working dog. They like to face new challenges, love to be outdoors most of the time, and can live in both cold and hot climates.

Doberman was first bred in the 1880s by Louis Dobermann, a tax collector in Apolda, Thuringen, Germany. With access to many dog breeds, he decided to produce a dog that would be full of energy, strength, intelligence and would protect him, and thus the Doberman came into existence.

But the more trained and refined version of the Doberman, which we see today, has been credited to Otto Goeller, who founded the National Doberman Pinscher Club in the 1890s.

The exact ratio and the number of breeds used to produce Doberman are still unknown; it is believed that Doberman is a combination of German Pinscher, German Shepherd, Rottweiler, Weimaraner, and Beauceron.

In 1894, after the death of Louis Dobermann, the dog was named in his honor, but later, the word pinscher was dropped by the German’s, considering it to be not a proper replacement for a terrier. Only in the United States and Canada, Doberman Pinscher’s name is still used.

It was registered in 1908 by the American Kennel Club and ranked 17th popularity-wise.

Doberman is a highly intelligent, busy, and active breed belonging to the working group. It means they can be trained quickly and become good watchdogs alerting their owner of anything intrusive and dangerous. The protective and alert nature make them a ferocious breed used by the police, military in search and rescue operations.

Head
It is long and dry, wedge in shape, widening gradually toward the base of the ears. Eyes are almond-shaped, deep-set, vigorous, with energetic expression. Iris is of uniform color ranging from medium to darkest brown in black dogs and blends with the markings in red, blues, and fawn-colored dogs. Ears are erect and cropped. The muzzle line is in parallel with the flat-shaped skull. Cheeks are muscular and flat-shaped.

Eyes are almond-shaped, deep-set, vigorous, with energetic expression. Iris is of uniform color ranging from medium to darkest brown in black dogs and blends with the markings in red, blue, and fawn-colored dogs.

Ears are erect and cropped. The muzzle line is in parallel with the flat-shaped skull. Cheeks are muscular and flat-shaped.

The nose is solid black on black dogs, dark grey on blue ones, dark brown on red ones, dark tan on fawns. Lips are closer to the jaws, which are complete and muscular.

Teeth are stronger and white, 42 correctly placed, 22 in the lower, 20 in the upper jaw. The lower incisors are upright and touching inside upper incisors and have a proper scissors bite.

Neck, Topline, Body
The Neck is well-muscled and dry. The nape of the neck widens gradually toward the body. The length of the neck is proportioned to the head and the body. Withers are well pronounced and form the highest point of the body. The back is short, firm, muscular at the loins. The chest is broad, and the fore chest is well defined. Ribs are well sprung and flattened in the lower end to permit elbow clearance. The brisket is deep to the elbow. The belly is well tucked up and forms a curved line from the brisket. Hips are broad and in proportion to the body. The tail appears to be a continuation of the spine and is just vertical when the dog is alert.

The nose is solid black on black dogs, dark grey on blue ones, dark brown on red ones, dark tan on fawns. Lips are closer to the jaws, which are complete and muscular. Teeth are stronger and white, 42 correctly placed, 22 in the lower, 20 in the upper jaw. The lower incisors are upright and touching inside upper incisors and have a proper scissors bite.

Forequarters
The length of the upper arm and shoulder blade are equal, downward and sloping forward at a 45-degree angle to the ground and meets the upper arm at 90-degrees. Height from withers to elbow is approximately equal in size from ground to elbow. Legs are parallel and straight from elbow to pastern when seen from front and side. Legs are well muscled and sinewy, with heavy bone. Feet compact, well arched, and catlike, turning neither in nor out.

Hindquarters
The angulation is well balanced with forequarters. Hip bones are long, wide, and well-muscled on both sides. The upper and lower shanks are equal in length. The hock to heel is perpendicular to the ground at rest.

Coat
The hair is smooth, short, thick, and close lying. It has an invisible grey undercoat on the neck.

Color
Dobermans are black, blue, red, blue, and fawn with rust markings above each eye, throat, muzzle, and fore chest.

Gait
Free, balanced, and vigorous with good reach and driving power in the forequarters and hindquarters. While trotting, the rear legs are strong, and the forelegs and hind legs are on the same side. Back remains strong and firm, and at a fast trot, it will single-track.

Doberman is large, fearless, energetic, vicious, and highly active. This breed may look less approachable but, when trained well, can be very protective, loyal, and trustworthy. Early Socialization and good training can help them with good behavior when they grow up.

The Doberman is larger than other breeds and will require an agile owner who can match their energy and exercise needs. The Doberman can be provided reward-based training, crate training, and brisk routine walk, but the owner should vary of the protective nature as it can sniff out any danger on its way.

The Doberman is low maintenance and needs less grooming. The coat is wash and wear that requires little maintenance to keep them in good shape. Brushing twice or thrice in a month will be more than enough. Clean its ears properly, and the nails should be trimmed once a month.

Doberman is a healthy breed, but they are prone to various health conditions.

Dobermans are prone to several health issues such as:

According to their body weight, the Doberman is large, active, and weighs about 60 to 100 pounds, requiring more energy and calorie intake than other breeds. Doberman’s chances of gaining weight are higher if a balanced diet is not given. The diet should include:

Dogs’ digestive system is anatomically different from humans; feeding a large number of carbohydrates may cause an unnecessary spike in insulin, glucagon, and cortisol levels, putting stress on vital organs with severe health conditions.

The Doberman can live indoor as well as outdoors if the area or yard is larger and fenced. These breeds cannot tolerate cold weather and do not like such an environment.

Adding a Doberman to Your Family

There are countless Dobermans in need of adoption and/or nursing, and there are several breed-specific rescue associations across the country that are listed below:

To Buy a Doberman Puppy Online