Doberman Pitbull Mix is a crossbreed of two pure breeds, Doberman Pinscher and American Pitbull. The crossbreeding of these eminent dogs results in an even-tempered, smart puppy inheriting the best qualities from the parents. Pitbull Doberman Mix is also known as Dober Pit or Pit Pinscher.

Doberman Pitbull Mix is a robust, active, muscular, high-energetic dog. Dober Pits are confident and courageous dogs with protective instincts, which makes them excellent watchdogs. These intelligent breeds are loyal to their owners and try to please them. Pit Pinschers are lively, alert, and sweet companions.

Dober Pits are muscular dogs with a Pitbull’s face in a Doberman’s body. They are medium-sized dogs with an average height and weight of 22 to 28 inches and 35 to 80 pounds. Their coat is short, straight in medium density.

Pit Pinscher’s temperament depends primarily on the dominating parent gene. However, training and upbringing can also influence their temperament. Therefore, it is advisable not to separate the puppies from their mother for 12 weeks for a safe start and stable conduct.

Dober Pits thrive on playtime and outdoor activities with you. They are prone to separation anxiety, so they should not be left alone for long durations. Their aggressiveness should be handled properly. Even though they have certain aggressive traits, they never bite humans. They may chase after other small pets such as cats, which can be prevented through socialization. Their compatibility with other dogs depends on socialization. Without adequate socialization, they might try to dominate, be overprotective of their food, or be jealous.

Doberman and Pitbull are known for their aggressive nature, which their offspring will also inherit. Adequate socialization is vital for your dog to grow into a calm natured that can handle her aggressive instincts. Training her to handle provocations will avoid violent behavior. Pitbull Doberman Mix has the habit of chewing objects, so you might have to include obedience training early.

Some Doberman Pitbull Mix can be stubborn. Your Dober Pit will listen to you if you establish yourself as the alpha. She should get used to it since puppyhood. You can train her efficiently by being kind and gentle to her while positively reinforcing proper conduct. Short training sessions will capture their attention to learn fast. You can get help from professional trainers or enroll her in puppy training classes.

The highly energetic Doberman Pitbull Mix requires walking or running twice a day along with more than 60 minutes of exercise every day. Daily exercise is necessary to burn their energy. This will also help to manage their aggressive temperament. You can also involve them in agility training, Schutzhund, tracking to keep them well stimulated.  Pit Pinches will love to accompany you on biking, hiking, beach runs, and jogging. You can play fetch, hide and seek, and other mentally- stimulating games with them. Avoid exposing them to extreme cold for long durations because of their short coat. When you are away, you can give them chew toys to keep themselves occupied.

The coat of Doberman Pitbull Mix is of medium length with moderate shedding. Their grooming needs are minimal, with brushing and bathing once a week. During shedding sessions, you might have to brush their coat thrice a week. Long nails can be uncomfortable, so you should trim their nails every three to four weeks. Wipe their ears with cotton to avoid ear infections due to dust accumulation.

Doberman Pitbull Mix is a robust dog with hybrid vigor. They can develop some genetic health conditions for their parents. These diseases can be cured through early identification. So, regular health checkups are vital.

Hip Dysplasia: Hip dysplasia is caused when the rear leg bones do not fit in the joints properly. This hereditary condition can be triggered by certain factors such as injuries, obesity, and wrong exercises. Hip dysplasia is life-threatening, but it can be cured through medications or hip replacement surgeries.

Ear Infection: Pitbull is prone to ear infections which can be passed on to Dober Pits. Cleaning her ears with moist cotton once a week can help avoid ear infections. During grooming sessions, pay special attention to her ear area. If there is hair growth inside the ear, either groom or pluck it with the help of professionals to avoid dirt accumulation.

Skin infections: Dober Pits are susceptible to skin infections.  Regular grooming and other precautions such as moisturizing can prevent this condition.

Heart Disease: Heart Diseases might cause abnormal heart murmurs and heart rhythm. This condition can be diagnosed through an X-ray, an ECG, or an echocardiogram. Treatment depends on the cause and ranges from medication, dental care to weight control.

Addison’s Disease: Addison’s disease, also known as hypoadrenocorticism, results from insufficient adrenal hormone production by the adrenal gland. Symptoms include vomiting, loss of appetite, and drowsiness. As these symptoms are common for other diseases, it is possible to overlook this condition. More severe symptoms are known if the dog gets depressed or her potassium level rises, interfering with the proper functioning of the heart. Addison’s disease can be diagnosed through various tests.

Von Willebrand’s Disease: An inherited blood disorder that disrupts blood clotting. Symptoms such as extreme bleeding after surgery or injury, bleeding gums, nosebleeds, or bleeding in the stomach or intestines indicate VWD. Currently, no cure is found for this condition, but a blood transfusion from a normal dog can be done.

Wobbler Syndrome: Wobbler Syndrome is an inherent condition that causes spinal cord compression or malformation in the canal. Symptoms such as neck pain, paralysis of the legs can indicate this condition.

Cardiomyopathy: In cardiomyopathy, the heart muscles become weak and thin. It can be identified through widening heart chambers, an abnormally large heart, and heart failure. Treatments include fluid therapy, oxygen supply, and medication.

Hypothyroidism: Hypothyroidism is a disorder in the thyroid gland that can cause epilepsy, obesity, hair loss, lethargy, dark skin patches, and other skin conditions. Treatment includes medication and a proper diet.

Aortic Stenosis: Aortic Stenosis is a heart condition that can cause deaths in dogs. The blockage on the aortic valve can reduce blood supply from the heart to other body parts. The transmission mode of this condition is not yet identified, but it can be detected through regular checkups.

High-quality dog food or homemade food can be given to Doberman Pitbull Mix. Feed her 3 cups of food divided into two meals. As Dober Pits are susceptible to joint dysplasia, ensure to include glucosamine, chondroitin, and fish oil in their diet. Maintain their protein and calorie intake to avoid obesity which can also cause hip and elbow dysplasia. Their calorie intake can be 30 Cal per pound. Their well-balanced diet should contain fat, fiber, vitamins, antioxidants, probiotics, and minerals.

Dober Pits are not suited for apartment living, but they are better suited for farmhouses and houses with backyards. A spacious, fenced backyard is necessary for Pitbull Doberman Mix to channel their energy positively by playing games and running around freely. They love to be outdoors but do not shelter them outside or leave them outdoors when you are away from home.

Dober Pits are not for first-time dog owners due to their aggressive instincts, which require proper training. You should have early experience with either parent breeds or other dominant large breeds to handle Doberman Pitbull Mix efficiently. If you have toddlers or children at your home, Pit Pinschers may not be the dog for you. The shrill voice of babies can trigger their preying instincts, and they might try to nip at the baby’s ears, fingers.

The difference between a male Dober Pit and a female Dober Pit is still unclear. AKC does not recognize hybrid breeds, and so few factors are known about Pit Pinschers. Every dog has distinct qualities determined by his / her genes, upbringing, environment, health, and various other factors, irrespective of gender.

A female Doberman Pitbull Mix can be aggressive and might be less affectionate towards her owner if she is not spayed. This aloof behavior can be high during her fertile cycle. In males, this behavior can be seen when he is not neutered. Spaying or Neutering can influence the temperament of the dog. If you don’t plan to involve your dogs in breeding, it is advisable to spray to neuter them to prevent the chances of cancer and increase their lifespan.

Things to Remember Before Cross Breeding

Crossbreeding has led pure breeds to be prone to many genetic health conditions. Mixed breeds are comparatively stronger because of the involvement of various genes. This is called Hybrid vigor, which makes the mixed breeds stronger and healthier than pure breeds.

Designer Dogs gained more popularity in the past two decades. Though kennel clubs do not recognize mixed breeds, they are sold at a higher price. While the temperament and physical characteristics are predictable for pure breeds, it is not the case with designer breeds. A mixed-breed can inherit 50%-50% of characteristics of both parents, or one parent’s traits can be dominating. Both the parents can either pass on their best qualities or worst qualities to the puppy.

Adding a Doberman Pitbull Mix to Your Family

Things to Remember Before Buying a Doberman Pitbull Mix

Ensure whether cross breeding Doberman and Pitbull is legal in your country, as designer breeds are banned in many places. It is advisable to buy from local, reputable breeders as they ensure the happiness and health of both the parents and the puppies. They should provide health clearance certificates along with gene tests for a vaccinated puppy. It would be best if you try to meet the parents of the puppy. In this way, you will get a healthy puppy and know the parents’ character traits.

On the other hand, backstreet breeders and puppy mills are profit-oriented and focus on producing more puppies. They ignore the health and welfare of the parents. Their prices may be low, but the puppies are usually unhealthy. Therefore, it is better to avoid those breeders.

If you buy from a reputable breeder, the Doberman Pitbull Mix Puppy will cost approximately $500 to $1500. If you are adopting from any rescue group, the puppy will cost $400. You might have to spend around $500 for vet visits, including vaccinations. If you wish to neuter your puppy, depending on the vet, pricing may range from $200 to $800. 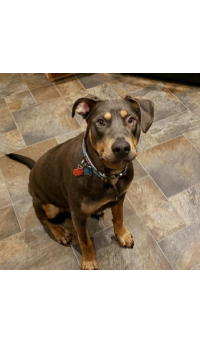