A Boxer Chihuahua mix, also called Boxachi, is a hybrid breed where the Chihuahua is crossed with the Boxer. As this hybrid is relatively new, little information is available about the Boxachi. Additionally, it’s unclear where the Boxachi originated, although speculation points toward the USA. This fun hybrid is noted for his sassy personality and dedication to his owner.

Chihuahua vs Boxer: A Comparison

Your Chihuahua Boxer mix may look more like one parent than the other but may also have a look completely all his own. Your Boxachi may weigh around ten to forty pounds and stand between 6 to 25 inches tall. Their size may range from medium to small while they may bear the small face as that of the Chihuahuas or the wrinkled face of the Boxer. Chihuahua Boxer mixes possess ears that are semi-folded, nose – short, and eyes – rounded or almond. Their legs are short but sturdily built, with their tails curling upwards.

The Chihuahua Boxer mixes typically possess the eternally playful nature of the Boxer. Despite the Chihuahua’s often aggressive behavior toward other pets, they get along well with all family members when socialized early on. While a Boxachi is friendly and affectionate to his human pack, he is a cautious dog who can spot a stranger and is only too happy to bark to let you know it.

Training your Boxachi can be difficult. First and foremost, they are quick learners, so learning the rules is not an issue. Instead, they can be headstrong and independent. So be patient with your dog and keep training sessions quick and entertaining. As always, positive reinforcement works wonders. Also, make your Boxachi understand who the boss is.

Creating an “alpha” stature for your dog to follow is where many people get confused. This does not indicate you need to “dominate” your dog or show them who’s boss through hitting, yelling, or any aggressive behavior. Being an “alpha” means not giving in to bad behavior.

Ultimately, if you are consistent and repetitive, your pup will learn their lessons and be better for them. They are devoted to you and eventually want to make you happy and smile. Plus, they like the treat, too. Early socialization for Boxachis is vital. Therefore, you want to start this training from day one, if possible, while also adding in behavioral, obedience, and housebreaking one step at a time.

While your Chihuahua Boxer mix can do quite well in an apartment, he will need daily walks to meet his need for physical and mental stimulation. A playful nature means this adorable canine will do well at a dog park or playing catch in your backyard. Boxachis are unsuitable for cold weather, so provide them a good winter coat for walks and dog parks during colder seasons. Keep your Boxachis on a leash, as these dogs are great escape artists, and make sure there are no gaps in your backyard fences. Remember, exercise needs should be served depending on the size of your Boxachi.

Boxachis have a short coat that sheds moderately. Due to this reason, grooming and maintenance are easy for this hybrid. If they boast a short coat, brush your dog once a week, while if your dog has a long coat brush many times a week with a slicker and pin brush but do not trim.

Luckily, Boxachis’ teeth, nails, and ear care are pretty basic. First, brush their teeth as often as possible. Also, check their ears twice a week and clean them gently with a cotton swab and canine ear cleaning product. Finally, trim the nails every four to six weeks once.

A Chihuahua Boxer mix can live for about 10 to 15 years or even more if he is given a healthy diet and properly exercised. Being a hybrid, they are supposed to do well in health. However, like all dogs, these dogs are prone to specific health problems.

The list of diseases that a Chihuahua Boxer mix is prone to are:

Hip Dysplasia: Hip dysplasia is a painful, life-threatening condition caused when the bones of the rear legs don’t fit properly in the joints. Hip dysplasia is primarily hereditary, but injuries, excessive weight gain, and wrong exercises can cause hip dysplasia. Some dogs might exhibit symptoms, while some might not. Treatment ranges from medication to replacement of the hip through surgeries. To prevent this condition, avoid breeding Chihuahua Boxer mixes with hip dysplasia parentage. Regular checkups are suggested.

Patellar Luxation: It is also known as “slipped stifles,” a common problem in small dog breeds that is caused when the patella, which has three parts-the femur (thigh bone), patella (knee cap), and tibia (calf) — is not correctly bounded. This leads to lameness in the leg or an abnormal gait, like a hop or a skip. This condition is caused by birth, although the actual misalignment or luxation does not always occur much later. The rubbing caused by patellar luxation leads to arthritis. There are four patellar luxation grades, ranging from phase I, an occasional luxation causing unstable lameness in the joint, to grade IV, where the turning of the tibia is heavy, and the patella cannot be realigned manually. This gives your dog a bow-legged appearance. Uphill grades of patellar luxation may require surgery.

Heart Diseases: Both the parent breeds suffer from heart issues, and the two significant crises to be aware of are mitral valve disease and cardiomyopathy.

Obesity: Obesity is a notable health disorder in Boxachis which is due to excess weight resulting in back pain, digestive disorders, joint problems, and heart diseases.

Ear Infections: Boxachis are prone to ear infections with symptoms of head shaking, scratching the affected ear, dark discharge, odor, redness and swelling of the ear canal, pain, itchiness, and crusting or scabs in the ears

Epilepsy: Idiopathic epilepsy is a common hereditary disorder. It frequently causes seizures, ranging from mild to severe. Unusual behaviors may indicate a stroke or frantically fleeing as threatened, stumbling, or hiding. Seizures frighten, but dogs with idiopathic epilepsy have a relatively good long-term outlook. Other than unexplained epilepsy, seizures can be induced by metabolic disorders, respiratory illnesses of the brain, malignancies, toxin poisoning, and severe traumatic injury.

Gastric Dilatation-Volvulus: Commonly called bloat, this is a life-threatening disease that affects large, deep-chested dogs like Chihuahua Boxer mixes, especially if fed one large meal a day, they eat fast, drink large volumes of water after meal, and exercise vigorously after eating. Bloat occurs when the stomach is swollen due to pressure with gas or air and then twists. The dog cannot vomit to get rid of the excessive air in their stomach, and the average remit of blood to the heart is impeded. Blood pressure falls, and the dog goes into shock. Without prompt medical attention, the dog expires. Suspect bloat if your dog has a swollen abdomen, is drooling excessively, and retching without throwing up. They also may be restless, lethargic, depressed, and weak with a rapid heart rate. It’s crucial to get your dog to the vet as soon as possible.

Cancer: The Chihuahua Boxer mix has a higher life expectancy than the other breed, so they are prone to cancer as they grow older. Cancer can be cured by surgical removal of tumors and chemotherapy. It is essential not to ignore the symptoms and diagnose them earlier.

The Chihuahua Boxer mix is a solid dog considered medium-sized and will need two and a half to three cups of a top-quality kibble. Also, because Boxers can be prone to a digestive issue called bloat, don’t plan to free-feed your Boxachi. Instead, provide him with 2 to 3 small meals throughout the day and make sure the food is low in fillers (grains and carbs) that may cause him to over-eat to feel complete.

The Chihuahua Boxer mixes do well in any kind of home. Whether a house with a backyard or an apartment, they get along well until their activity needs are met.

Adding a Chihuahua Boxer Mix to Your Family

Crossing two pure breeds like Chihuahua and Boxer can have a terrifying effect on the offspring. In addition, crossbreeding may pass on the health problems of the parents to their puppies. So, when crossing a Chihuahua and a Boxer, check their parent’s lineage and health records from a responsible breeder to avoid ending up with a weak hybrid pet.

On average, a Chihuahua Boxer mix puppy may cost around $900 to $2000. This entirely depends on the sex of the puppy you chose, the breeder’s location, the show record of the parent dogs. Check for the puppy’s parents’ health clearances before buying. Also, it is suggested to visit the breeder’s place to view the puppy’s parents’ lively and estimate how your dog may look in the future. 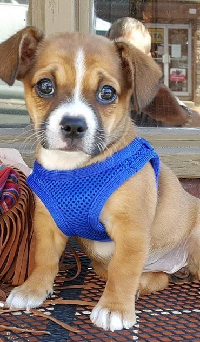 Who’s A Boxer Chihuahua Mix-breed (Boxachi)? Should you Even think of Getting one?