Blue German Shepherd dogs are large breed dogs. Interesting is not just their breed but also their name. German Shepherds belong to Germany, which originated in late 1800. They are one of the most intelligent and responsive breeds among dogs. They were created from the local shepherd dogs for herding sheep and protecting flocks from predators. Also, these dogs have a dome-shaped head with a long, square muzzle. That’s how this breed ended up with the name German Shepherd.

The blue coat in German Shepherd is not pure blue but a shade of intense dark blue mixed with opaque black. The variations for the coat of Blue German Shepherd are between subtle to dramatic blues and blacks, depending on the parent dog.

It is precisely unknown when the Blue German Shepherds came into existence, but they result from a gene mutation. The gene decides the color and pigmentation in the dog breeds. When genes are paired together, they are called genotypes. This genotype is responsible for the blue coat in the German Shepherds. Also, the genes are of two types: Dominant and Recessive. When the pup adopts the dominant gene from the parents, it has a standard black coat. But, if the puppy adopts recessive genes, it leads to a Blue German Shepherd. The only difference between the Standard German Shepherd and the Blue German Shepherd is their coat color. Otherwise, they share the same characteristics.

Blue German Shepherds are known for their loyalty, kind-heartedness, bravery, confidence and can be close- confident. Over the years, the Blue German Shepherd has become a family’s favorite for those who are lucky to own them. They are loving, affectionate, and very protective of those they love. Being working dogs, they need to work. In the absence of proper mental and physical stimulation, they become anxious. They are possessive of their owner, and their need to protect their owner results in undesirable traits like barking, growling, and sometimes aggressiveness. However, one can avoid such undesirable traits with proper training and socialization. German shepherds are the most lovable, intelligent, caring, affectionate, and faithful companions when an appropriate amount of time and energy is invested.

Blue German Shepherd either has a medium coat or a long coat. However, they have a double coat with a dense under layer, soft under the skin, which keeps warm as they are primarily out as working dogs. Commonly, Blue German Shepherds have lighter colored eyes. They are usually light blue, golden brown, or yellow. They have dome-shaped heads with long, square muzzles. Like any other dog breed, they also have a pointy head, officially called the occiput that protects the dog’s skull. Their ears are long and erect. As being called a strong breed, they are also said to resemble their wolf ancestors.

The barking levels of these dogs are frequently loud. For example, according to a study, the Blue German shepherd was louder than a moving truck that emitted 86 decibels of sound.

Blue German Shepherds are known to be highly intelligent dog breeds. They can be trained to do any task and be taught at a very young age. Also, they are very obedient, which makes them easier to be trained than any other dog breed. All one needs is 15-20 minutes per day to teach them from as young as six months of age.

Blue German Shepherds require plenty of activities to optimize their health and wellbeing. They need a lot of attention, play, and exercise to keep themselves happy and healthy. Activities to keep them engaged include walking, swimming, flyball, herding, tracking, playing fetch, and obedience training. These activities satisfy the natural “ working dog” instinct instilled in them. In addition, games and activities keep their mental health stable and prevent anxiety in dogs.

Blue German shepherds need exercises of 90 minutes per day. The training can be of various sorts, including walking, running, and playing. It can also be spread across the day and need not be continuous.

Blue German Shepherds are easy to groom compared to many other dog breeds. Most Blue German Shepherds have a double coat with a thick undercoat and a smooth, short-haired outer jacket. The shedding season is usually early spring and in the late fall. Blue German shepherds need regular brushing once a week, which keeps the dog’s coat healthy and shiny. Brushing helps remove clump hair and pull out the loose fur during shedding. One of the essential parts of grooming is bathing which keeps the dog clean. However, frequent bathing causes dry skin and itches. Bathing your dog once in 6-8 weeks using shampoos with ph. balanced for dogs and pet wipes will keep your dog’s coat fresh, clean, and shiny. Both the German shepherds need to be groomed well. They had to be groomed 3-4 times a week. Brushing is a must for these dogs as they shed hair throughout the year. It has to be noted that German Shepherds do not need regular bathing.

Blue German shepherd’s teeth need to be cleaned regularly with a brush. Their teeth are prone to develop plaque and tartar due to their food, and it needs to be checked frequently. Never brush the teeth with a stiff brush as it will harm the gums and teeth. Also, make sure to use dog-friendly toothpaste.

Trimming toenails is an essential part of the grooming procedure for a Blue German Shepherd. Their toenails need to be checked once a week as longer nails may harm and injure the dog. You can trim the toenails with a commercial dog nail trimmer or with the help of a vet or professional groomer.

Blue German Shepherd’s ears should be checked and cleaned regularly once a week. When poorly groomed, the ears tend to develop excess wax and debris. They can be cleaned using ear drops, wiping off the wax, and a soft cloth or cotton pad. Cleaning with water leads to infection as the water gets deposited in the ear canal. Always remember to clean your Blue German Shepherd in a quiet and uncrowded place.

Blue German shepherd dogs are also prone to health issues. Most of the health-related problems are the same as the other German shepherds. The health conditions of Blue German Shepherds are the same as the standard German shepherd dogs. The best way to have a healthy pup is to buy from a reputable breeder. Blue German shepherds being very active dogs develop health issues due to unethical breeding practices. Unethical breeding causes hereditary diseases such as hip and elbow dysplasia, blood disorders, digestive problems, epilepsy, chronic eczema, keratitis (inflammation of the cornea), dwarfism, and flea allergies. It is necessary to follow high standards in the breeding process to avoid the various genetic disorders in the litter.

Blue German shepherds are medium-sized dogs. They need high nutritional food that provides them enough energy that helps them to thrive. Depending on weight, age, and activity, they need about 1740 and 2100 caloric intake per day, on average. Therefore, it is recommendable to use the calorie calculator tool.

Protein and fat are the two essential ingredients for a Blue German shepherd dog. The puppies need 22% of the protein in their food, whereas the adults need about 18% of protein. Blue German Shepherd puppies need 8% fat for growing puppies and 5% for maintenance. Protein-filled diets like chicken, lamb, fish, and lamb helps the dog’s brain and muscles work correctly. Also, omega-3 DHA fats from food like fish oil and vitamin E add to the good fat value for the puppy’s brain development.

Adding a Blue German Shepherd to Your Family

Blue German Shepherds are bred primarily for their color. Hence, there are things to keep in mind before breeding.

The Blue German shepherd puppy costs anywhere between $1200 and $1500, although the price depends on the breeders. 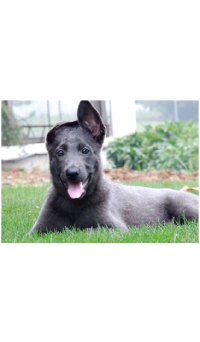