The German shepherds and the Bloodhounds are two breeds with exemplary characteristics. Crossing these two breeds will give you an offspring ideal for an active family. Even though they are a rare breed, the German Shepherd Bloodhound will be an excellent fit in the police department as a rescue and guard dog. If not in the disciplinary forces, they make an ideal companion. Determined, friendly, and even-tempered, this breed is irresistible.

German Shepherd vs. Bloodhound: A Comparison

The German Shepherds and the Bloodhounds are similar in size. But Bloodhounds generally have thicker muscles and larger bones, making them heavier than the German Shepherds. However, both parents have excellent companionship with children. Thus, this personality is evident in their heirs.

The German Shepherd Bloodhound mix can grow as tall as 23 to 27 inches and weigh around 110 Pounds. Like other breeds, males tend to be more muscular, and feminine traits will be more evident. The coat color will depend on the dominant parent gene, and if it is the German Shepherd lineage, you expect a dog with a thick double coat and a short, smooth inner coat. On the other hand, if the Bloodhound’s genes are dominant, you will get a short and dense coat hybrid breed. Also, expect a dog with folded skin around the head and neck if the parent Bloodhound genes are more robust.

With the German Shepherd’s courageous character and Bloodhound’s stamina, expect an energetic puppy worthy enough to endure any challenge they pass through. The German Shepherd Bloodhound mixes are intelligent breeds, and so they are preferred for military, police, and service purposes. They are very tenacious, protective, and faithful, so they make an adorable family dog. They are friendly and can go well with children. Since they adore their owners, it will be comfortable and easy for the pet parents to train them. Unfortunately, they cannot be left alone for a long time since they may face depression or separation anxiety problems. In addition, the high energy levels and herding instincts of German Shepherds and Bloodhounds can make them detrimental. Thus, maintain your pet engaged with mental and physical activities.

Owing to their intelligence, you can efficiently and effortlessly train German Shepherd Bloodhound Mix. However, their over smartness and stubbornness can be challenging to manage. Yet, you can efficiently train them using positive reinforcements. Please make sure not to use any physical pressure on your dog. Instead, use disciplining techniques which won’t impact them physically and emotionally. Bloodhounds tend to bark and have various growling sounds. Hence, your German Hounds may also inherit the traits. It will help if you train your puppy to control its barking. Also, avoid excess treats as they can result in obesity.

German Shepherd Bloodhound mix is a highly active and energetic outdoorsy type of dog. They should always be engaged in some activities. Physical and mental stimulation is essential for them. Otherwise, they will become nervous and aggressive. A daily exercise of about sixty minutes of physical activities and two hours of walking is recommended. Here are a few outdoor activities to keep your pet engaged:

Some indoor activities are:

If you are an enthusiastic person who has enough time to spend with your pet, then German Shepherd Bloodhounds are suitable dogs for you.

The grooming requirements of German Shepherd Bloodhound Mix rely on the type of coat they inherit. They have a medium-length thick double coat with moderate shedding. Frequent brushing will suffice. Though, if they inherit double coats, grooming necessities might be high. Managing their coats healthy and clean would only require brushing at least two to three times weekly with a smooth bristle brush.

The German Shepherd Bloodhound mix has other grooming requirements that include nail trimming, and eyes and ear cleaning. In addition, you can bathe them using a canine shampoo having neutral pH once or twice a month. Dental care is an essential part of grooming. Introduce a toothbrush gradually and brush his teeth regularly to prevent the risks of periodontal diseases.

As German Shepherd Bloodhound is a mixed breed dog, they are relatively healthy. Unfortunately, this does not signify that they will be resistant to any disease. However, a balanced diet, healthy lifestyle, and regular check-ups can avoid many health disorders.

Elbow Dysplasia: A painful hereditary disorder generally affects large breed dogs. This disorder is caused by deviations in the maturing rates of the three elbow bones. Because of this, the joints will be loose, resulting in distress and lameness.

Hip Dysplasia: A distressing disorder caused when the hip’s socket part fails to fit the ball portion, directing to joint dislocation. Hip dysplasia may occur at birth or an early age as it is congenital. When the affected canine ages, this disorder can further expand into arthritis.

Patellar Luxation: This painful condition is slipping the knee cap from its spot in the legs. Signs are that the affected dog might feel uncomfortable while hiking or running and kick its leg to set the knee cap on its position.

Bloat: Bloat happens if the dog’s gut is filled with gas or air due to pressure. When the canine cannot get rid of this extreme air, it will fall in blood pressure and go into shock. Signs include retching without vomiting, restlessness, lethargy, depression, swollen abdomen, excessive drooling, and weakness with a rapid heart rate.

Glaucoma: Glaucoma is prevalent in both canines and humans. This eye infection can even result in blindness. In affected dogs, signs such as squinting, watery eyes, pain, and redness can be evident.

Epilepsy: This disorder causes seizures and can happen in extreme and moderate episodes. Unique actions like desperately running as if hunted, struggling, or hiding may indicate a seizure. In addition, different elements such as cancers, toxic poisoning, extreme head trauma, metabolic conditions can cause seizures.

Obesity: Obesity is a common health disease in the German Shepherd Bloodhound mix. Excess weight can result in back pain, digestive disorders, joint problems, and heart diseases. The ideal way to control this disorder is by maintaining a healthy diet and routine exercise.

Cataracts: An affected eye will look unclear due to the appearance of a white film-like coating over the eye lens. This situation should not be left untreated as it can lead to blindness.

Kidney Disorder:  Bladder stones or kidney stones are the most familiar problems with the German Shepherd Bloodhound mixes are caused by hormonal changes, dehydration, kidney infections, and diet changes. Signs include fever, abdominal pain, blood, and pus in the urine.

German Shepherd Bloodhound mix requires a low-carb, protein-dense diet. As they are predisposed to bloating, you can serve them small quantities of food multiple times daily. You can also include fish and meat in their regular diet. Make sure that your pet is eating the food gradually, because fast intake of food can lead to bloat. These breeds can quickly gain weight, so they must compensate for their treats and food quantity.

German Shepherd Bloodhound mix can be detrimental when they are bored. In addition, their size and temperament make them unsuitable for apartment living. The ideal living situation would add a vast backyard to efficiently run around with a fence to handle their protective disposition.

Adding a German Shepherd Bloodhound Mix to Your Family

Things to Remember Before Buying a German Shepherd Bloodhound Mix

Even though it is a rare breed, you can talk to any German Shepherd or Bloodhound breeder and check the possibilities of having this mixed breed. Hence, it is advised to get from reputable breeders as they ensure the health and happiness of both the pups and parents.

A German Shepherd Bloodhound puppy can range from approximately $250 to $1000. 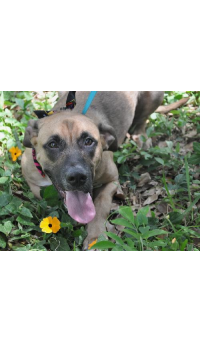