Beagle is an active, cheerful, and fun-loving medium-sized scent dog. Beagles are nosy (unlike the humans) pooches with a commendable sense of smell, and no scent escapes these dogs. They were bred to be hunting dogs and primarily used to hunt hares and rabbits. And as a fact, Beagles have approximately 220 million scent receptors that help them follow and smell any kind of scent.

Beagles are gentle, playful, and compact. Though Beagles belong to the hunting group, their petite size, gentleness, floppy ears, and expressive puppy eyes make them appealing as family pets. In addition, they are super friendly and constantly look for a new best friend in every pet or human they encounter. On a lighter note, prepare yourself to be less possessive of your Beagle fur babies before getting one. They are dogs with high energy and require a lot of exercise. Lack of exercise and activities leads them to bark, howl, and destructive behavior.

The facts leading to the history of the Beagle dog breed are blurry and believed to be brought to England by the Romans to hunt small rabbits and hares. However, there is a mention of Beagle-like dogs in the Greek documents dating back to 400 BC and thought to have been bred with local hounds later on. Similarly, the origin of its name, “Beagle,” is also unknown. Some believe it may have been derived from the French words begueule or beugler, meaning open throat and bellowing, respectively. Few others think it may have come from the old English word, beag, meaning small, due to its compact size.

The now extinct Talbot hounds were brought to England by William The Conqueror during the Norman Conquest in 1606. Talbot Hounds are believed to be the ancestors of Beagles and FoxHounds. Beagles became popular among the Royal and High-Class English Society as early as 1300 A D. During the times of Edward II(1307-1327) and Henry VII(1485-1509), Glove Beagles became popular. Glove Beagles are extremely small in size that fit the size of a glove. There were also Singing Beagles that had a musical note to their voice. Elizabeth I(1533-1603), too, had a pack of Pocket Beagles that were only 9 inches tall. They were depicted as short-legged and pointy-nosed in the paintings belonging to that era.

During the 1700s, Foxhounds were used for hunting, and Beagles were not favored. Thanks to the farmers of England and Ireland, who kept the Beagles for hunting hares and rabbits and saved them from becoming extinct. Again in the mid-1800s, Beagles were bred for hunting skills, and they are believed to be the ancestor of modern-day Beagles. Around the same time, Beagles were imported to America and were produced smaller to hunt rabbits.

An Interesting Beagle strain called Patch Beagle was developed with white as the primary line and a big tri-colored spot in Newyork and was very popular during the 1940s and 1950s. Presently, lemon, white, red, and white Beagles are called “Patch Beagles.” It is interesting to note that AKC and the first Beagle Specialty Club was founded in the same year, in 1884. Also, AKC recognized Beagles in the following year, 1885. Beagles are now the seventh most popular breed of America.

Beagles have been classified into two varieties based on their size. Except for the size, other characteristics remain the same.

Beagles are of two types of sizes- small and medium. The smaller Beagles weigh 20 pounds, and the larger ones weigh 20-35 pounds. They are small yet powerful dogs. All Beagles are double-coated, and their coats are short and smooth. They come in various colors but mostly have tri-colored coats of black, tan, white or blue, tan and white, lemon and white, red and white, and chocolate and white. They are not hypoallergenic and are prone to shedding throughout the year. They shed heavily, especially during the spring season. They have expressive big and brown puppy eyes,  square and floppy ears, and erect tails tipped in white.

Beagles are active, happy, outgoing, lively, and fun-loving dogs. They are very appealing with their soft, pleading expressions and always lookout for a new friend. Beagles love food, and their focus remains undeterred when it comes to food. They take their food pretty seriously. The exciting part is that they have three different vocalizations – bark/growl, a baying howl, a half baying howl.

Beagles get along with other animals and strangers quickly. They are scent hounds and escape when they find any exciting smell. However, they get bored when left alone, leading to barking, howling, digging, and even trying to escape. They are kid-friendly and make a good family dog.

Beagles’ noses work more than their brains, and they love to sniff and track the smells. They need to be on leashes and trained to control to prevent the dog from tracking. We recommend you to crate train them at an early stage. Beagles are strong-willed and require proper obedience training, without which they tend to become unruly. They are challenging to train and command, and hence it has to be made fun and entertaining. They need to be socialized early with all kinds of people, animals, and the environment.

Beagles are active, energetic and need loads of regular exercise. A daily routine of 60 minutes of exercise is ideal for keeping the dog’s mental stimulation intact. Walking twice a day with lots of space to run and play keeps the dog happy and healthy.

Beagles are double-coated and water-resistant. The coat is short with a high to moderate level of shedding. They don’t require frequent bathing. The floppy ears need to be cleaned regularly to prevent ear infections. Nails need to be trimmed to avoid overgrowth and any injury. The teeth should be brushed twice a week for good oral health.

Beagle is a healthy and active dog. Yet, it’s always wise to be aware of the health conditions they are prone to.

Progressive Retinal Atrophy: A degenerative eye disorder that causes blindness from the loss of photoreceptors at the back of the eyes. It can be detected earlier. A very later stage is blindness. Dogs with this condition can survive for several years since they have other senses to compensate.

Hip Dysplasia: Hip dysplasia is outwardly a painful disease that occurs when the bones of the back legs do not fit properly in the joints. While some dogs will exhibit symptoms, the majority of canines will not. Hip dysplasia is primarily genetic, although other causes such as accidents, excessive weight gain, and inappropriate training can also cause it. Even though this disease is fatal, therapies range from medicine to hip replacement surgery. This condition causes defects or damage to the hip bones and joints and worsens without treatment. To avoid this problem, avoid breeding dogs with hip dysplasia parentage and get annual examinations.

Epilepsy: Idiopathic epilepsy is a common hereditary disorder. It frequently causes seizures, ranging from mild to severe. In addition, unusual behaviors may indicate a stroke, such as frantically fleeing as threatened, stumbling, or hiding.  Seizures frighten, but dogs with idiopathic epilepsy have a relatively good long-term outlook. Other than unexplained epilepsy, seizures can be induced by metabolic disorders, respiratory illnesses of the brain, malignancies, toxin poisoning, and severe traumatic injury.

Intervertebral disc disease: They inherit this disease from the parent breeds. The disc that separates the spine’s backbone weakens over time and affects the spinal nerve. This causes severe pain and is life-threatening.

Cherry eyes: This condition causes the dog’s third eyelid gland to bulge out. It looks reddish at the inner corner of the eye. You can treat cherry eyes in dogs surgically.

Patellar Luxation: It is also known as “slipped stifles,” a common problem in small dog breeds that is caused when the patella, which has three parts-the femur (thigh bone), patella (knee cap), and tibia (calf) — is not correctly bounded. This leads to lameness in the leg or an abnormal gait, like a hop or a skip. This condition is caused by birth, although the actual misalignment or luxation does not always occur much later. The rubbing caused by patellar luxation leads to arthritis. There are four patellar luxation grades, ranging from phase I, an occasional luxation causing unstable lameness in the joint, to grade IV, where the turning of the tibia is heavy, and the patella cannot be realigned manually. This gives your dog a bow-legged appearance. Uphill grades of patellar luxation may require surgery.

Hypothyroidism: Low thyroid levels in dogs cause overweight issues and become weak, dull, and not life-threatening.

Distichiasis:  An additional row of eyelashes grows on the eye’s oil gland and protrudes along the edge of the eyelid. This irritates the eye. This is treated by a surgery called cryoepilation in which the excess eyelashes are frozen with liquid nitrogen and then removed.

Glaucoma: This is a painful condition in which the pressure in the eye gets abnormal. The fluid called aqueous humor is produced and drained constantly in the eye. If this fluid doesn’t drain properly, it leads to pressure in the eye, causing damage to the optic nerve. This results in blindness. There are two types.

Beagle Dwarfism: The dog is smaller, not average in this condition. They may or may not include abnormal conditions such as extremely short legs.

Chinese Beagle Syndrome (CBS): This condition causes broad skulls and slanted eyes. Other than this, the growth is average. Dogs with this condition are prone to heart problems and toe abnormalities.

Beagles require a daily amount of ¾ to 1.5 cups of high-quality dry food divided into two meals. They are active dogs and need the right amount of nourishment. Therefore, you can feed them a well-balanced protein diet along with calorie-rich food. However, every dog’s diet depends upon the size, age, metabolism, and activity level. They love to eat and are prone to obesity. Nothing makes them happier than a treat now and then. However, they can be kept healthy and in shape with the nourishing and right amount of meals. At regular intervals, provide your dog with clean and fresh water.

Beagles are scent hounds and must be kept secured and fenced. They have wandering tendencies, so they have to be leashed and microchipped. They are small in size and have a gentle temperament which allows them to be suitable for apartment living. However, they get bored when left alone and tend to destructive behavior.

Adding a Beagle Dog to Your Family

Things to remember before adding a Beagle Puppy to your family

It is best to get a Beagle Puppy or dog from a reputable breeder to prevent unavoidable circumstances like health and vaccination. In addition, it is best to visit the puppy’s parents to cross-check its health and happiness. Following health clearance certificates are essential: 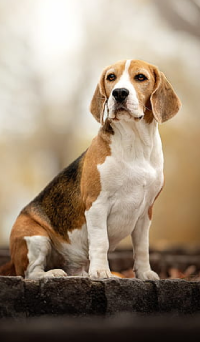 Top 10 Reasons To Get a Beagle

Things NOBODY tells you about owning a Beagle

Male vs Female Beagle : Which Should You Choose?

18 sounds a beagle makes in under 4 minutes

Beagle Pros And Cons | The Good AND The Bad!!

Facts About Beagle Dogs 101-All You Need to Know