American Bulldog Pitbull mix is a crossbreed between the pure breeds American Bulldog and American Pitbull Terrier. Also called Bullypit, they were developed to combine the best qualities of the parent breeds. Bullypits are medium-sized dogs and are loyal, sweet, and brave. Despite their dangerous look, Bullypits are trustworthy and family-friendly companions. They are designer dogs, so the AKC does not recognize them.

The parent breed American Bulldog is the descendant of the English Bulldog and originated in the United States around the 17th century. They are strong and tough and are part of American history and culture, used as cultural icons of the USA. These large breed dogs are used on animal farms, canine sports, and dog shows.

The other parent breeds American Pitbull Terrier is a medium-sized dog recognized by the UKC but still not recognized by AKC. Though they originated in the United States, their ancestors came from the British Isles. They are strongly built working dogs and are intelligent, enthusiastic, confident, and friendly.

Hence, American Bulldog Pitbull Mix brings together the fierce qualities of their parent breeds. They are stocky little beasts with goofy smiles and robust features.

American Bulldog Pitbull Mix are feisty medium-sized dogs that grow up to 25 inches tall and weigh about 40- 80 pounds. They have a muscular body with a smooth, glossy coat and are not hypoallergenic. The head, mouth, and feet are large and proportionate to the body. They have short muzzles, black noses, broad chests, and a firm back structure. The ears are high and erect, and the eye color varies. The mouth looks comical with a rigid smile that gives an ever-smiling appearance. The coat colors include chocolate, brown, white, or a mix of any of the colors.

American Bulldog Pitbull Mix looks dangerous but is loyal, affectionate, and intelligent. They love their owners and get overprotective sometimes, which leads to aggressiveness. However, with early socialization and training at an early stage, they are well-mannered. Though they are protective of their families’ kids, you cannot leave them alone with the kids without supervision.

Bullypits are independent, stubborn, and confident, which makes training challenging. They are gentle souls that are friendly and love to play and have fun. Bullypit puppies are sweet, loyal, and make adorable family companions. Their overall temperament includes:

American Bulldog Pitbulls are stubborn and difficult to train. They need perseverance, vigilance, and consistency in training. Like any other dog breed, they require early socialization and proper training. They are sweet-natured, and American Bulldog Pitbull becomes the perfect puppy to live with positive reinforcement. They love being around people; treats and cuddles do wonders while training.

Training sessions should start with basics like sitting and lying down commands, which helps in behavioral corrections training. They enjoy playtime and tricks, and this mental stimulation keeps these dogs happy. Their activity can include the following:

American Bulldog Pitbull are active dogs and need enough exercise to keep their muscles and bones toned and strong. They are always eager to learn new things and look for new adventures. They love to play with toys, walk, hike, and run. They can be involved in high-intensity games, agility, obedience, playing fetch, frisbee, and canine games. These American Bulldog Pitbull require walking, running, and hiking to keep their energy levels. A daily exercise of 90 minutes, 2-3 walks, and some play sessions inside the house are ideal and keep them happy and healthy. They love spending time with their owners, and hence just some indoor games and toys will make them joyous.

A proper exercise routine helps the dog with the following benefits.

American Bulldog Pitbull are low-maintenance dogs and do not shed a lot but have a seasonal shedding pattern. Generally, they shed medium to a high level. They are easy to groom, and the coat needs to be brushed 2-3 times per week. Brushing helps remove clump hair and pull out the loose fur during shedding.

One of the essential parts of grooming is bathing which keeps the dog clean. However, frequent bathing causes dry skin and itches. Bathing your dog using pH-balanced shampoos for dogs and pet wipes will keep your dog’s coat fresh, clean, and shiny. You can also bathe them once a week. However, daily brushing helps to keep the fur from knots and tangles.

American Bulldog Pitbulls are healthy dogs and may not develop any health concerns. Still, it always helps to know when to take your pup to the vet.

Hip Dysplasia: Hip dysplasia is outwardly a painful disease that occurs when the bones of the back legs do not fit properly in the joints. While some dogs will exhibit symptoms, the majority of canines will not.

Hip dysplasia is primarily genetic, although other causes such as accidents, excessive weight gain, and inappropriate training can also cause it. Even though this disease is fatal, therapies range from medicine to hip replacement surgery. To avoid this problem, avoid breeding dogs with hip dysplasia parentage and get annual examinations.

The most common cardiac issue is left ventricular hypertrophy, an enlargement of the heart’s left ventricle. This enlargement can be caused by many factors, including high blood pressure, obesity, and old age. Owners need to know how to recognize these symptoms and take their dogs to the vet for treatment.

Dogs with a history of heart disease may show signs like coughing or breathing problems, fatigue, lethargy, and vomiting. These signs are often accompanied by decreased appetite and weight loss.

Skin Problems: The continual scratching or licking of your Bullypits can be as annoying as nails on a chalkboard. But don’t blame your dog for his bad behavior; the skin issue is most likely to be blamed. Parasites, allergies, and underlying sickness are all possible reasons. The following are the symptoms of skin problems in dogs:

Allergies: Allergies are a body’s immune system’s misdirected reaction to external chemicals, which can affect both people and dogs. In dogs, there are many distinct types of allergies. Skin allergies, food allergies, and environmental allergens all pose problems for dogs and their owners, and to make matters worse, the symptoms of all of these allergies often overlap. The following are the symptoms of allergies in dogs:

Spay or Neuter: In spay, the ovaries or uterus in females is removed, and in the neuter, the testicles of the male dogs are removed. It eliminates the possibility of pregnancy or fathering unwanted puppies and decreases the likelihood of certain types of cancer.

American Bulldog Pitbulls are hybrid dogs. Therefore, they need a large quantity of high-quality food. They should eat 2.5 to 4 cups of dry dog foodl every day. Each puppy is distinctive, and the correct amount and quality of food depend on their age, weight, activity level, health, and more. You can split their meals into two 2 cups daily.

Bullypits are prone to obesity, and hence overfeeding must be avoided. They can be given dry food. Make sure the diet contains omega-3 fatty acids, vitamins, chondroitin, and glucosamine. You can also feed them with fruits and vegetables that give carbohydrate energy. Never hesitate to consult a vet to meet your pup’s dietary requirements to keep them happy and healthy.

American Bulldog Pitbull loves to be around their humans. They are adaptable and can live in apartments with sufficient exercise or homes with bigger yards. They are energetic and love outdoor activities like walking, running, playing, hunting, and visiting dog parks. When allowed in a backyard, they should be in a properly fenced area as they are known to be good jumpers. They love the attention of their owners and suffer from separation anxiety when left alone. They do not suit homes with smaller kids and do not do well with other animals.

American Bulldog Pitbull is sensitive and cannot tolerate cold weather conditions. It is best to cover their bodies with warm clothes during harsh winters.

Adding an American Bulldog Pitbull Mix to Your Family

Get an  American Bulldog Pitbull Mix puppy from a reputable breeder to prevent unavoidable circumstances like health disorders and provide you with vaccination certificates. It is best to check with the puppy’s parents to ensure his health and happiness. Always remember the following red flags to avoid backyard breeders and puppy mills. 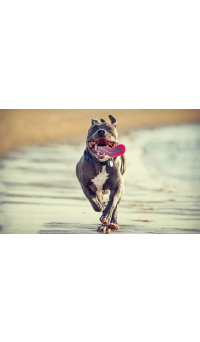 What is a Bully Pitbull? | FreakShowBullys.com