Agouti Husky’s origin may be traced back to the Alaskan gold rush in America. They were taught to drag light sleds over the snow and ice in groups. They also protected sustenance herds of reindeer and drove predators away from human settlements.

Agouti huskies have a peculiar look that gives them the impression of being “filthy.” It’s closer to a wolf’s natural DNA, and it’s proof of their history of being developed for function. They may be gray at birth, but as they become older, they gain particular characteristics.

‘Agouti’ is a colloquial name for a specific breeding line. It refers to a set of genes that govern the production or suppression of certain hues in the coat and skin of dogs. Agouti genes impact cells that make eumelanin, the dark pigment seen in animals.

Agouti Husky is thought to have originated in between a Siberian nomad, Chukchi. The breed’s history is unknown, but DNA testing suggests it as one of the oldest dog breeds. We know that the Chukchi utilized the dogs as a mode of transportation and interacted with them as family dogs. Huskies frequently slept with the children and offered them warm, comfy beds.

During the gold rush in Alaska, Agouti Husky was imported and employed as sled dogs. They were utilized in the All-Alaska Competition, a 408-mile dog sled race, and are still active in the Sweepstakes today.

According to records, the last Agouti Husky was shipped from Siberia in 1930, when the Soviet authorities closed the borders. However, in North America, the breed continues to prosper. They have altered significantly from their Siberian foundation dogs, the Chukchi Sled Dog, yet they still have many of the breed’s outstanding characteristics.

The American Kennel Club recognized the Husky in 1930 and the Canadian Kennel Club in 1939, and the Siberian Club of America was created in 1938.

Agouti Husky is an adventurous, elegant, agile, affectionate, loyal, and playful working dog. They are of medium size, with a thick coat and a compact build. They have upright, triangular ears and a fox-like brush shape on their tail. When the dog is attentive or at attention, the tail is upright, in a sickle-like form, rather than hanging down or trailing behind. The almond-shaped eyes come in blue, brown, or one of each color, with a thoughtful expression, and the moderate nose is slightly tapered.

Agouti Husky was raised to work in big groups and live among humans. The average Agouti Husky has evolved into a pleasant and cooperative breed that gets along well with a family member, other animals, and even strangers. Although this breed is ordinarily tolerant of youngsters, contact with little children should always be supervised due to this breed’s robust build and proclivity for playfulness. In addition, they are an energetic and athletic species with a reputation for fleeing. The best approach to discourage your curious puppy from trying to escape is to keep them well-exercised and too busy to be interested in running. However, if they will be spending time in the yard, investing in a fence that is at least six feet tall and lacks paw grips isn’t a terrible idea, just in case.

Training Agouti Husky is essential, and you may wish to invest in more advanced obedience programs. However, many owners and trainers find this problematic because the breed is brilliant and can recognize school and home differences. Though Huskies don’t generally bark, they are vocal animals. You can hear the Husky howling for miles.

Crate training is a key strategy that breeders frequently recommend. It protects your dog and puppies while also providing them with their own secure space to go to when they are stressed or tired. However, never use a crate as a punitive measure.

It would help if you never kept Agouti Huskies off-leash outside of a fenced area. Thus leash training is essential. They enjoy running and will do so regardless of how far away you are. If your Agouti Husky decides to chase something or wants a strong gallop, you could quickly lose him. Agouti Huskies have a strong prey drive. Hence it is essential to keep them on a leash while strolling.

An Agouti Husky needs a lot of exercise and activities as they are packed with energy. They need to shed their sweat to calm themselves down.  An Agouti Husky will need 90 minutes to cover 14 miles each day. They like hiking, playing jump and fetch, strolling around, and looking at that game. If kept idle without any activities, they will have behavioral issues. They need proper and exhaustive mental and physical stimulation to upkeep their health.

Agouti Huskies sheds a lot while they shrug their coats and during spring. However, this is a relatively simple breed to care for. Agouti Huskies that live in temperate regions shed less than those who dwell in hotter climes. Brush your dog’s coat at least once a week throughout the year and daily during shedding season to avoid matting and excess hair on your furnishings.

Agouti Huskies are comparatively clean breeds hence do not necessitate regular baths unless they swindle themselves into the garbage or something dirty. It is best to refer to safe pet shampoos during bath time.

Brushing Agouti Huskies teeth twice a week is enough to eliminate tartar build-up in the teeth. However, daily brushing can keep away lousy odor and gum disease. It is essential to trim their nails twice a month to avoid accidents and painful tears. Check his ears once a week for redness or a foul odor, suggesting an infection. To help prevent infections, wipe out your dog’s ears with a cotton ball wet with a mild, pH-balanced ear cleaner. Do not clean the ear canal; instead, clean the outer ear.

Check your Agouti Husky’s skin, nose, mouth, and eyes, as well as their feet, for sores, rashes, or symptoms of infection such as redness, tenderness, or inflammation. There should be no redness or discharge in the eyes. Your weekly examination will enable you to detect potential health issues early.

Agouti Huskies are typically healthy. However, they are susceptible to some health issues, as are all breeds. Although not all Huskies will contract any or all of these illnesses, it’s vital to be aware of them if you’re thinking about getting one.

Cataracts: A cataract is an imperfection on the eye’s lens that causes vision problems. The dog’s eye(s) will be hazy in appearance. Cataracts are most common in older dogs and can occasionally be removed surgically to improve vision.

Corneal Dystrophy: The cornea is affected by this condition. It is an opacity induced by a lipid accumulation in the cornea. It is most common in young adults, and it disproportionately affects females. This illness has no treatment. However, it does not appear to impede vision.

Progressive Retinal Atrophy: This progressive eye disease results in the loss of photoreceptors at the rear of the eye, eventually leading to blindness. Even before the dog shows any vision issues, PRA can be detected. Fortunately, dogs can compensate for their eyesight by using their other senses. Reputable breeders have their dogs’ eyes examined by a veterinary ophthalmologist yearly.

Epilepsy: Repeated seizures without an identifiable cause or abnormal brain damage characterize epilepsy, a brain illness. To put it another way, the brain appears normal yet works strangely.

Hemophilia: The most prevalent inherited blood clotting condition in dogs is hemophilia. It is caused by a gene mutation that causes a deficit in the blood clotting factor VIII (8). Factor VIII is required for the normal development of blood clots. This mutation prevents a dog from manufacturing influential Factor VIII, disrupting the blood coagulation process.

Laryngeal Paralysis: The cause of laryngeal paralysis is idiopathic in the vast majority of instances (unknown). A traumatic injury can cause laryngeal paralysis to the throat or neck. Tumors or space-occupying lesions can also cause this syndrome in the neck or chest.

Your Agouti Husky needs a backyard with a 6 inches fence to run around, hike, play fetch and do other activities. He cannot adapt well to the apartment as he may bark more often. He also suffers from separation anxiety, ensuring a family member stays with him to spend time and keep him physically and mentally stimulated.

Adding a Agouti Husky to Your Family

Cost of an Agouti Husky Puppy 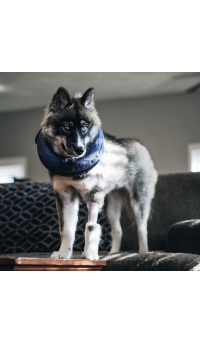